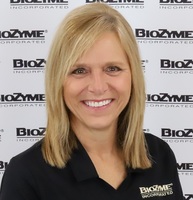 Evelyn Wyble brings a background in livestock and human health to her role as marketing production coordinator on the nutrition team. She joined the BioZyme staff in 2019 and had previously worked as a Pharmacy Technician for nine years. The Louisiana native earned a bachelor’s degree in Animal Science with a minor in Journalism from Louisiana State University. The first trip she ever made to St. Joseph, was just down the street from BioZyme to the Stockyards when her LSU Meats and Livestock Judging Team stopped to evaluate hogs for practice at the stockyards in route to Ak-Sar-Ben in Omaha. She and her husband, Mark, have three adult sons, a beautiful daughter-in-law and two precious granddaughters. She and her husband enjoy working around their acreage, fixing up their barn for movie nights and trail riding.