Just like Butch Cassidy and the Sundance Kid, biscuits and gravy, and chips with salsa, some things are just meant to go together. Another pair that goes together is Vita Charge® and antibiotics. Vita Charge is a fast-acting, multi-species livestock supplement for use during stressful times when livestock need protection or assistance in recovery.

“Some people think about giving Vita Charge Cattle Drench when getting in sale barn cattle, and that is a great protocol, but anytime you are giving an antibiotic, be sure to give a Vita Charge product along with it. It’s like peanut butter and jelly, the two things just need to go together,” said Chris Kyle, BioZyme® Inc. Area Sales Manager for east Texas, Arkansas and Louisiana.

Amaferm® is the key ingredient in the Vita Charge line. Amaferm is a precision prebiotic designed to enhance digestibility by amplifying the nutrient supply for maximum performance. It is research-proven to combat stress by supporting the animal’s own immune system, significantly increasing intake and nutrient utilization. The Vita Charge product line offers versatility in many forms making application easy depending on what is best for your animal.

Another product that can be used when giving antibiotics to all species and is perhaps a little more portable is the Vita Charge Gel. This easy-to-use gel comes in 60- and 300-mL tubes. Kyle said he knows of several cattle producers who will carry this horseback or in their ATV when they are in bigger pastures and need to treat an animal. The Vita Charge Gel also helps build back bacteria, and contains MOS to trap and expel pathogens, limiting their ability to do harm. It can be used across all livestock species.

“If you aren’t darting them to treat them, there is a way to get Vita Charge into them,” Kyle said.

Two more Vita Charge products are available to producers that can be used with antibiotics, though they are often used with bigger groups of livestock.

The Vita Charge Stress Tub is the second step in the weaning and receiving protocol. Available in 50- and 200-pound tubs, it is the convenient way for cattle to get their daily dose of Vita Charge without extra handling. The cooked tub for beef cattle now includes a heat-tolerant probiotic to work synergistically with Amaferm to replenish and stimulate gut bacteria. In addition to adding these to your pens when getting in new cattle or at weaning, Kyle also recommends the Vita Charge Stress Tubs for any operations that have a “sick pen.”

“If you have a designated sick pen on your place, it should always have something orange (the color of the Stress Tubs) in it. You know those calves are stressed and their immunity is compromised, and they need the Amaferm and MOS more than ever in that situation when they are also getting treated,” he said.

Finally, Vita Charge Liquid Boost® is another versatile, multi-species product that can be fed multiple ways, though most usually administered in water. It can be administered via a medicator, mixed with water, used as a drench or top-dressed on feed. Kyle said for those cattle that have been trucked multiple hours, across time zones and climates, this is a great tool to help them drink once they have reached their new destination.

“If cattle have had a long haul on a semi, and their new owner wants to give them a day or so to get settled before they process them, they could add some Liquid Boost in their water, to help their gut get right. Regardless of if they are ready to eat yet or lick a tub, they are going to have to drink at some point,” Kyle said.

Liquid Boost is also great for any species, and its palatable flavoring helps create consistency in taste of any water source.

Vita Charge offers something for all species with multiple applications. It is designed to help build up the bacteria in the digestive system, something necessary when antibiotics are used. Antibiotics and Vita Charge – they just go together like peas and carrots. 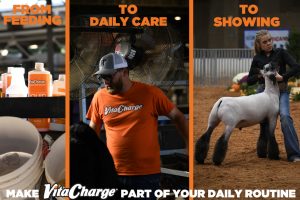 It seems simple to establish a routine with your livestock projects. You probably already have a regimen when it comes to feeding times and rations. Depending on the time of year and other activities, you should have time set aside for daily skin and hair care as well as exercise. Doesn’t it make sense to […] 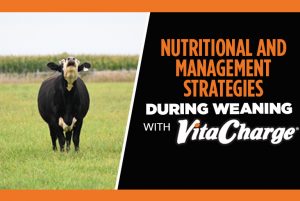 Chris Cassady, Ph.D, Beef Technical Sales Manager, BioZyme® Inc.  Weaning spring calves is in full force, which means new calves will soon be entering a stocker or feedlot operation. Cattle are creatures of habit; and any disruptions to their livelihood will induce stress and impact performance. Weaning represents a massive interruption to their daily routine […]