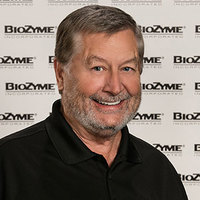 Bob Norton is the CEO at BioZyme, and he started with the organization in 2000 after a lengthy career in the meat packing industry. As CEO, Bob oversees the activities of the employee-owned company and works closely with the COO to monitor growth both domestically and internationally. He is a native of Saint Joseph, enjoys giving back to others, aviation and is active in the Veterans Airlift Command. He is passionate about the future of agriculture and has been recognized for his contributions by being inducted in the Honorary Angus Foundation. He is currently an active promoter of the National Junior Hereford Association.