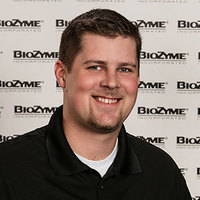 Jake Warntjes is a native of Oregon, where he grew up on his family’s club lamb operation. He was involved in showing all species of livestock in 4-H and FFA. He attended Redlands Community College and was on the livestock judging team. He earned his bachelor’s degree in Animal Science at Oklahoma State University, where he was a member of the 2012 National Champion Livestock Judging Team.

Prior to BioZyme, he spent the last three years as a sales and client services representative for TransOva in Texas. Warntjes is passionate about the livestock industry and enjoys judging shows and helping young exhibitors succeed with their projects. He likes to assist his brother with his club lamb operation in California when time allows.