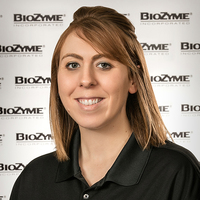 Jamie Beatty, Senior Graphic Designer, creates the images that brand BioZyme® products for the public. She develops advertising and promotional pieces that creatively convey a message that resonates with consumers. She has a degree in Agricultural Communications and Animal Science from The Ohio State University. She previously served as the Director of Communications for the Ohio Pork Producers Council and worked at Encore Visions since 2009, before joining BioZyme in 2017.

Jamie and her husband, Greg, have a club lamb operation in Indiana, Pa., where they have 150 ewes and produce lambs for 4-H and FFA projects. She has two sons, Stetson and Brooks. She also enjoys helping young kids with their livestock projects.