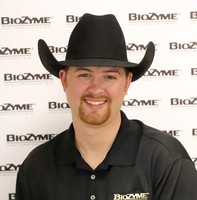 Shane Schaake is a Kansas native who has extensive knowledge of the cattle business. He grew up on his family’s Simmental operation north of Manhattan, where they still raise about 100 purebred and percentage Simmental cows. He and his brother showed heifers across the country while growing up. Today, the Schaake family hosts an annual heifer sale with a focus on selling junior show heifer prospects. They also conduct a spring bull sale. He and his wife, Melissa, have started building their own herd of registered Hereford cows. Schaake attended Kansas State University, where he earned his bachelor’s in Animal Science in December 2015. After college, he managed a 700-head commercial cow-calf ranch on the edge of the Sandhills in Eastern Colorado. Prior to joining the BioZyme team in January 2020, he worked for Genex. Although he said cattle are his first passion, he also enjoys hunting, fishing and spending time with family.