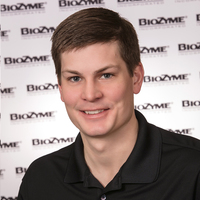 Brett Tostenson, Highmore, S.D., has a strong background in the cattle industry. He was raised on his family’s commercial cattle operation in west-central Minnesota, and he spent the last 7 ½ years working for TransOva. He has a bachelor’s degree from South Dakota State University, where he dual-majored in animal science and business economics. He joined the BioZyme team as an ASM for South Dakota and eastern North Dakota in March 2019. Tostenson and his wife, Laura, have a young son, Holden. They also run a small herd of registered Angus and Simmental cattle and market heifers and bulls privately and through consignment sales. They also market embryos and flush opportunities on their Angus and Simmental donors at national and international levels.