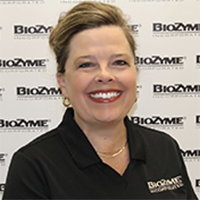 Elishia Carrillo has dedicated her career to international sales and is the International Regulatory Support at BioZyme Inc., where she’s worked since 2000. She previously worked in international sales for five years each at both Boehringer Ingelheim Animal Health and Thompson’s Pasta Plus. Elishia has a Bachelor’s of Science degree in Business Administration with an emphasis in International Business and a Bachelor’s of Arts in Spanish from Missouri Western State University. With her role in international business, she enjoys getting to help the BioZyme business grow globally, and therefore helping even more animals. She considers herself rich beyond measure because of the friendships she has developed around the world. She enjoys traveling and hopes to see all the wonders of the world. She and her husband, Steve, have three sons, two daughters-in-law and three grandchildren.