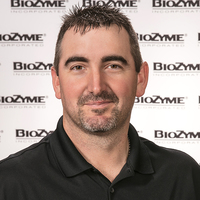 Alan Lee has an extensive background in the cattle industry and has been involved in numerous sectors of the agriculture industry. Lee joined BioZyme in 2012.

Prior to joining the team, Lee worked as a sales representative for Gallagher Animal Management. His passion for livestock began at an early age and continued through college where he was on livestock judging teams at Eastern Oklahoma State College and the University of Arkansas. He obtained his B.S. in animal science from the University of Arkansas.

Lee, his wife, Christy, and their two children, Kix and Bristol, reside in Gilham, Arkansas where they run 85 head of commercial and purebred cows, and focus on producing show steer and heifer prospects.