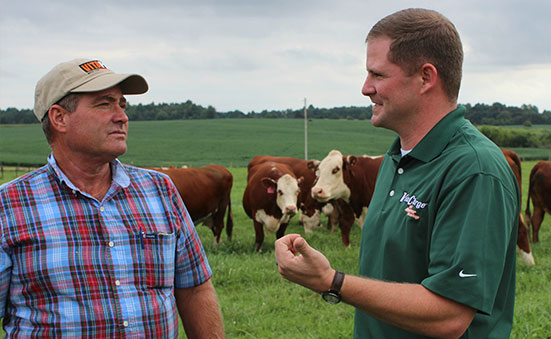 Pricing is an issue of which 99-percent of all dealers struggle. However, Doug Underwood and his Area Sales Manager, Ben Neale, contest this issue with testimonials to demonstrate the benefits of including BioZyme® products in their customers’ nutritional programs in order to prove its value and thus price accordingly.

Underwood has been selling BioZyme products for more than five years and became a dealer when he needed access to the supplement and mineral lines for his own cows. After using it for 19 years on his Polled Hereford seedstock, Underwood was a convinced of its worth. When his local dealer retired, he decided to establish his own BioZyme dealership at his farm near Campbellsville, Kentucky.

Many of Underwood’s customers were familiar with the products, but to continue to educate them as well as new prospective customers, Underwood and Neale have hosted field days to talk about how and why BioZyme products work. Underwood says when he hears the question of expense, he focuses his selling points around Amaferm®.

“That is what sets this brand apart from other mineral products,” Underwood says. “It’s one particular ingredient that makes a big difference in cattle. They have a much better feed intake and appearance. That’s the positive result you get from Amaferm.”

Neale’s territory covers Tennessee, Kentucky and Mississippi, so he’s on the road working with dealers like Underwood. In addition to field days and producer meetings, he says BioZyme has many marketing tools available to help dealers explain to producers how investing in premium products will increase their bottom lines. When Neale visits with dealers, he encourages them to think about inventory control. “Our price list shows buying 22 tons at a time is the best way to achieve greater margins, but if you have to sit on inventory for 6-10 months that may cost more money if operating on a line of credit,” Neale says. “So, we try to focus on flipping inventory faster. You can still turn a profit if you buy 5-10 tons at a time, and the product remains fresh for the customer.”

Underwood says the time he puts into selling a value-added product like those BioZyme provides is worth it. Even when cattle prices are down and it seems like input costs and supplements, like BioZyme, don’t make sense, he encourages fellow producers to try the product. Their return on investment will become apparent when they wean heavier calves or when cows settle on the first cycle. And he says, he would never lower his prices to match a competitor. “When they start comparing ingredients and prices from the local feed store, I have to show them what Amaferm does for them instead,” he says. “The math will speak for itself. If I can get a cow bred on the first cycle instead of the second I’ve saved 21 days at maybe $1.50 per pound and gain another two pounds per day for those 21 days for a total of 42 lbs. at weaning for an additional $63 per calf. The benefits BioZyme products provide for the additional cost pencils out in the long run.”

Neale says dealers should remember when faced with price comparisons from other mineral products they should focus on the ingredients BioZyme provides and how the ingredients found on the tag are not found in any other product. That’s what the extra pricing goes toward – better ingredients plus Amaferm in the mineral bag.

Neale says he talks to customers about Amaferm and how this prebiotic increases gut health, increases feed efficiency and helps animals recover faster from times of stress. The added benefit, he says, of two products in one bag is also a good selling point during price discussions.

Another benefit of the Neale-Underwood team is that ASM’s like Neale can help dealers grow their business outside of an established customer base. Neale is working with Underwood to recruit sub-dealers and build a network from customers who are two or more hours away.

“I am working with Doug to build upon his strong local relationships,” he says. “It’s new for both of us but without the availability of stores in his area he has to network with breeders and others who can help grow his business.”

“Real business is successful when someone sees a return on investment not on price,” Neale says. “We want customers who use these products to understand and believe that as well. When you talk with someone who’s going on a diet, are they going out to buy and consume healthy food or junk? It’s the same with cattle. If you want higher returns then you have to be conscious of what you’re feeding them. You may have to pay more to be efficient.”

“Just let the product speak for itself,” Underwood says.