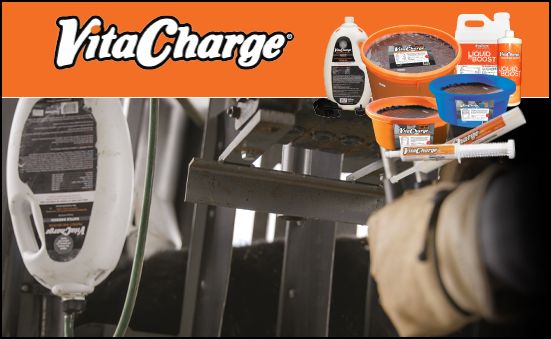 Just like Butch Cassidy and the Sundance Kid, biscuits and gravy, and chips with salsa, some things are just meant to go together. Another pair that goes together is Vita Charge and antibiotics. Vita Charge is a fast-acting, multi-species livestock supplement for use during stressful times when livestock need protection or assistance in recovery.

“Some people think about giving Vita Charge Cattle Drench when getting in sale barn cattle, and that is a great protocol, but anytime you are giving an antibiotic, be sure to give a Vita Charge product along with it. It’s like peanut butter and jelly, the two things just need to go together,” said Chris Kyle, BioZyme®Inc. Area Sales Manager for east Texas, Arkansas and Louisiana.

Amaferm® is the key ingredient in the Vita Charge line. Amaferm is a precision prebiotic designed to enhance digestibility by amplifying the nutrient supply for maximum performance. It is research-proven to combat stress by supporting the animal’s own immune system, significantly increasing intake and nutrient utilization. The Vita Charge product line offers versatility in many forms making application easy depending on what is best for your animal.

Kyle offers some tips to position each of the Vita Charge products.

Another product that can be used when giving antibiotics to all species and is perhaps a little more portable is the Vita Charge Gel. This easy-to-use gel comes in 60- and 300-mL tubes. Kyle said he knows of several cattle producers who will carry this horseback or in their ATV when they are in bigger pastures and need to treat an animal. The Vita Charge Gel also helps build back bacteria, and contains MOS to trap and expel pathogens, limiting their ability to do harm.

“If you aren’t darting them to treat them, there is a way to get Vita Charge into them,” Kyle said.

Two more Vita Charge products are available to producers that can be used with antibiotics, though they are often used with bigger groups of livestock.

The Vita Charge Stress Tub is the second step in the weaning and receiving protocol. Available in 50- and 200-pound tubs, it is the convenient way for cattle to get their daily dose of Vita Charge without extra handling. The cooked tub for beef cattle now includes a heat-tolerant probiotic to work synergistically with Amaferm to replenish and stimulate gut bacteria. In addition to adding these to your pens when getting in new cattle or at weaning, Kyle also recommends the Vita Charge Stress Tubs for any operations that have a “sick pen.

“If you have a designated sick pen on your place, it should always have something orange (the color of the Stress Tubs) in it. You know those calves are stressed and their immunity is compromised, and they need the Amaferm and MOS more than ever in that situation when they are also getting treated,” he said.

Finally, Vita Charge Liquid Boost® is another versatile, multi-species product that can be fed multiple ways, though most usually administered in water. It can be administered via a medicator, mixed with water, used as a drench or top-dressed on feed. Kyle said for those cattle that have been trucked multiple hours, across time zones and climates, this is a great tool to help them drink once they have reached their new destination.

“If cattle have had a long haul on a semi, and their new owner wants to give them a day or so to get settled before they process them, they could add some Liquid Boost in their water, to help their gut get right. Regardless of if they are ready to eat yet or lick a tub, they are going to have to drink at some point,” Kyle said.

Liquid Boost is also great for any species, and its palatable flavoring helps create consistency in taste of any water source.

Vita Charge offers something for all species with multiple applications. It is designed to help build up the bacteria in the digestive system, something necessary when antibiotics are used. Antibiotics and Vita Charge – they just go together like peas and carrots. 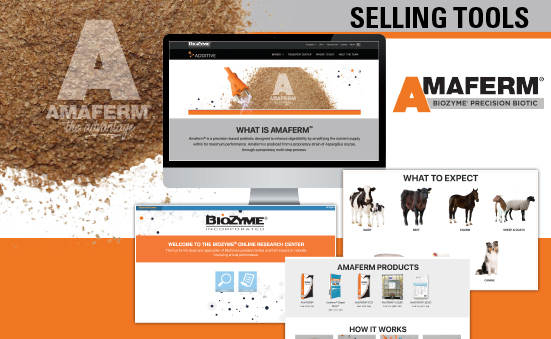 Why Your Customers Need It:

• Promotes Feed Intake: Intake is controlled by many factors including physical fill and energy requirements. Amaferm increases digestion, which would allow the cow to eat more feed in a day

• Increases Feed Digestibility: The digestibility of feed determines the amount that is used by the animal for growth, reproduction, etc. Essential nutrients in the form of energy, proteins, minerals, vitamins and water (above those necessary for maintenance of normal body functions) must be not only provided to the animal, but digested if the animal is expected to maximize performance.

• Maximizes Nutrient Absorption: Absorption is the movement of molecules across the gastrointestinal (GI) tract into the circulatory system. Most of the end-products of digestion, along with vitamins, minerals and water are absorbed in the small intestinal lumen by four mechanisms for absorption: (1) active transport, (2) passive diffusion, (3) endocytosis and (4) facilitative diffusion.

For more results and research for other species, visit www.amaferm.com

The new Amaferm website is now available by visiting www.amaferm.com.
Key Features Include:
• Detailed information about what Amaferm is and how it works
• What to Expect with Amaferm broken down by specie
• Searchable Online Research Center 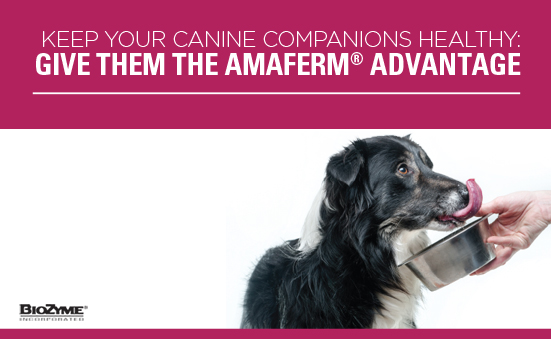 Man’s best friend, the dog, has become a more integral part of most of our everyday lives. As veterinary care and technology evolves, dogs are living longer, healthier lives. As dog owners and lovers, we can help support this healthy lifestyle by providing adequate nutritional and digestive support.

Dogs are monogastrics, but unlike pigs and humans, are primarily carnivorous. In order to digest animal fats and proteins quickly and efficiently, dogs have short, acidic digestive tracts. Compared to other animals, dogs release a higher amount of hydrochloric acid, which aids in the breakdown of proteins and helps kill off any bacteria that could be found on raw meat. They also digest their food more quickly than animals that are herbivorous because plant material takes longer to break down. A longer digestive process is also associated with a longer digest tract. Therefore, dogs have a very short digestive tract compared to many other animals.

When your dog’s digestive system is functioning properly, the typical meal takes between 6 and 9 hours to pass through the digestive tract. In comparison, the entire digestive process in a cow generally takes more than 24 hours. During this time, the food is reduced into basic nutrients that the dog can absorb and utilize. Carbohydrates are broken down into simple sugars, fats into fatty acids, and proteins into amino acids, all which work to keep your dog looking and feeling healthy.

Common threats to healthy digestion in dogs include eating inappropriate foods or garbage, abrupt changes of diet, intestinal parasites, food allergies, infections, and viruses. When your dog’s digestive system is not functioning properly, the result may be gas, diarrhea or vomiting. For some dog owners, perhaps the most common cause of digestive upset is consumption of inappropriate items such as garbage, manure or hoof clippings.

Whatever the cause, Amaferm® helps smooth digestion by stimulating microbial enzyme production in the dog’s small intestine. These enzymes help break down food so it can be better utilized by the body. In addition to improving digestion, Amaferm also helps maximize the absorptive capacity of the gut. Several trials in conjunction with kennels, pet food manufacturers, and veterinarians have shown the benefit of Amaferm in increasing digestion and absorption of food and reducing nutrients left in fecal matter. Better digestion and absorption of food means healthier dogs with less digestive upset and less waste! 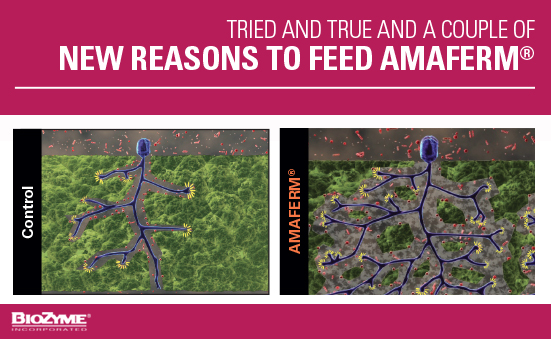 With nearly 65 years of history, feeding Amaferm® has made raising livestock better. We often rely on past accomplishments to promote and use a product like Amaferm. The truth is, even though Amaferm has been successfully used for decades, there are new and exciting reasons to promote and use Amaferm daily.

From the beginning, livestock producers have noted increased weight gains, milk production and improved feed efficiency. Research was conducted in the 1980s and ‘90s to explain “how and why” livestock operations were experiencing these benefits. Results indicated Amaferm promoted fungal branching, which allows more bacteria to attach to feed particles. Amaferm contained enzymes and other compounds that promoted both bacterial and fungi growth. Additionally, it was determined Amaferm increased the number of bacteria living in the gut, whether they were passed from the rumen to the small intestine or if they resided in the hind gut. The outcome from gut microbial growth was an increase of 34% in VFA production, forage NDF digestibility of 17% and improved total diet digestibility of 9%. Trials indicated dairy cows responded to Amaferm with a 4 to 5% increase in milk production or growing cattle with 9% increase in gain. When compared to the cost of other technologies used for these same improvements in forage digestibility and animal performance, Amaferm was found to have one of very best return on investment.

And A Couple of New Reasons

Over the past five years, BioZyme® has continued its pledge to discover the benefits of including Amaferm in livestock diets. Producers have consistently given BioZyme testimonials highlighting health, diet adaptation and the ability to maintain feed intake. These testimonials from customers and dealers assist BioZyme in directing research protocols that advance the building of its industry-leading research library.

Last year, University of Tennessee-Martin faculty, along with ASM Ben Neale, solidified the Amaferm advantage with receiving and starting calf feeding programs. They studied the advantage of using the one-two punch of Amaferm as recommended by the Gain Smart™ Stocker program (Vita Charge Cattle Drench and Vita Charge Stress Tubs MOS). The cattle responded immediately to receiving Amaferm during the first week and the calves exhibited that advantage by gaining nearly 10 pounds more than their counterparts. These results indicate the calves had better appetites and were more aggressive when coming to the bunk. After three weeks on Vita Charge Stress Tubs the calves were turned out to graze grass paddocks for four weeks. Calves were weighed, and the trial was completed after the seventh week at the unit. The results showed calves started with Vita Charge Cattle Drench and Vita Charge Stress Tubs MOS gained 0.60 pounds per day more, which translated into a 30-pound weight advantage by the end of the 49-day trial. This data enforces the importance of proper nutritional management during the first three weeks after calves are shipped or weaned and that Amaferm is an essential part of an economically successful starter program.

Several customers have asked if Amaferm is effective with cattle diets that contain ionophores. In a multi-year ongoing study being implemented at The Ohio State University, researchers are providing positive results when using Amaferm in corn silage-based, feedlot receiving diets containing Rumensin and good bunk management. During the first two weeks of starting calves, average daily gain of Amaferm fed calves was 1.23 pounds per day as compared to controls gaining 0.62 pounds per day. The ability of the Amaferm treatments to result in greater average daily gain indicates there was less metabolic stress, and greater diet digestibility during the first weeks in the feedlot. The importance to cattle feeders is they can achieve greater, more efficient diets containing ionophores by simply adding Amaferm to the diet.

The bottom line is Amaferm continues to provide livestock feeders the opportunity to make the animals perform and grow faster as well as be more efficient and profitable. The old and the new, the tried and the true, Amaferm was discovered on added animal performance and the story continues to unfold of the added benefits of including Amaferm in the future.