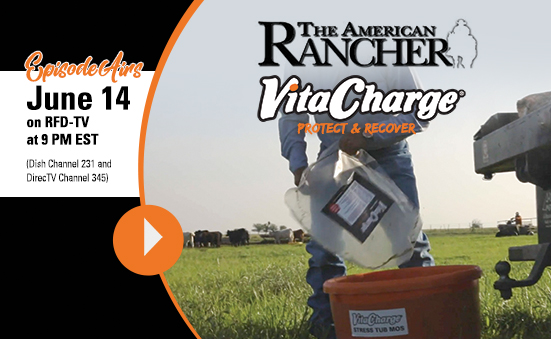 Our next episode of The American Rancher is TONIGHT at 9 PM EDT! Be sure to join us as we feature our Vita Charge line of products! 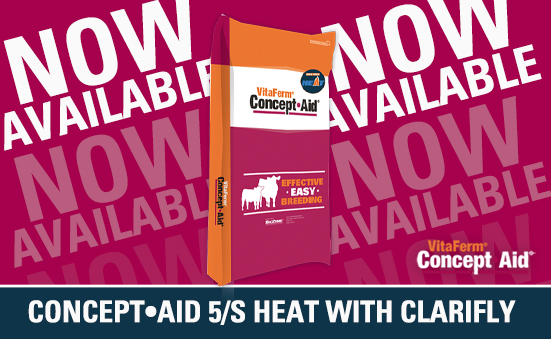 You asked, we listened. The ultimate summer breeding mineral is here! VitaFerm Concept•Aid 5/S HEAT with ClariFly is now available and ready to order! This mineral package combines the benefits of Concept•Aid to get cows bred with the proven effectiveness of the HEAT package for summer grazing and NOW added 4-fly control with ClariFly! ClariFly helps control horn flies, face flies, stable flies and house flies in the larval stages. 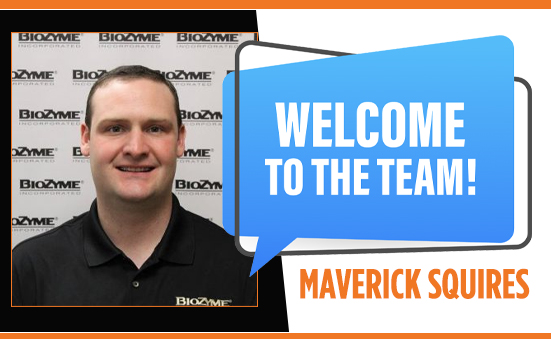 Maverick Squires, Dover, Oklahoma, is the new Area Sales Manager for BioZyme® Inc. As an ASM, Squires will work to develop new dealerships and build upon current dealer and customer relationships while promoting BioZyme’s numerous product lines in the state of Oklahoma. He replaces John Jeffrey, who has been promoted to Feedlot-Stocker Business Development Manager.

“I like the science behind the products. I started using them and saw how they work firsthand. The culture of the people who work at BioZyme really impressed me with their professionalism and talent. The company has good products and good people,” he said.

Squires brings a diversified background and multifaceted experiences to his new role. A graduate of Oklahoma State University, with a bachelor’s in Animal Science, he was a member of the livestock judging team. He also competed on the Butler Community College livestock judging team. He most recently worked for Animal Health International for five years, where he called on mixed-practice clinics and large-scale livestock producers. He has worked for a boar stud as well as gained other valuable experiences in the livestock industry.

“I am very excited to have Maverick join the BioZyme family! His background in the livestock industry should prove to be extremely beneficial to his own personal success as well as the success of the company. Maverick is a native Oklahoman who is a hard worker and will bring a wealth of knowledge to his customers,” said Jake Warntjes, National Sales Manager.

Squires plans to use his skills and experiences to continue to grow the business while helping customers and potential customers realize the value of the what the BioZyme products will bring to their operations, both from an economic standpoint and for their animals.

“I am really excited to work with everyone and appreciate the opportunity to be here,” he said.

He and his wife McKenzie have one son, Sterling, and will welcome a second child this spring. They raise show pigs and are anxious to become involved in his grandparents’ cow-calf operation. Squires also enjoys hunting and fishing when time allows.

For a list of BioZyme Area Sales Managers, visit https://biozymeinc.com/our-staff.

BioZyme, Inc will be conducting a switch over to updated Accounting and Inventory Systems during the New Years Weekend. Our online ordering system will not be available December 31st, 2020 through January 5th, 2021. We will also not be shipping any product during that time. 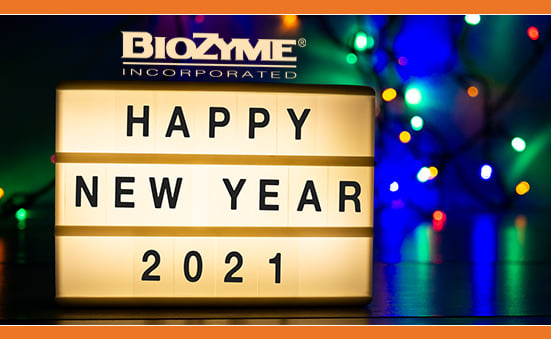 The BioZyme offices will be closed Friday, January 1, 2021 for New Year’s Day. We will resume our normal business hours Monday, January 4, 2021. We wish you a happy new year and can’t wait to see what 2021 brings us at BioZyme! 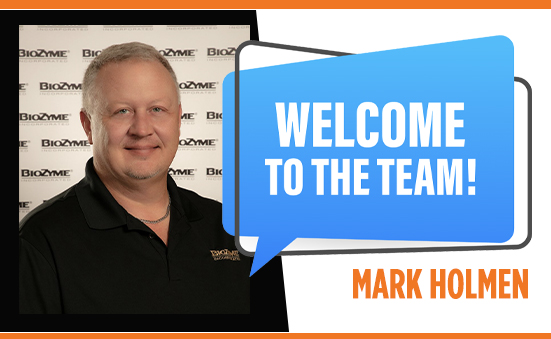 Mark Holmen, Lanesboro, Minnesota, has joined the sales force at BioZyme® Inc., as an Area Sales Manager. In his new role, he will represent BioZyme working with dealers, potential dealers and end-users in Minnesota and Wisconsin.

Holmen has an extensive background in the livestock industry. He was the fifth generation to be raised on his family’s farm and is currently raising the sixth generation, his two sons on that same farm, where they raise Angus and Red Angus cattle and show pig prospects. He has worked the past six years in the beef genetics business. He is a graduate of the University of Minnesota – Saint Paul and was a member of its livestock judging team.

“Mark brings a positive attitude and a strong work ethic to this position, as well as a diverse understanding of the beef and dairy businesses. These traits combined with his eagerness to help all producers and dealers succeed will make him a tremendous asset to BioZyme in Wisconsin and Minnesota,” said Mike Wadle, BioZyme Director of National Sales.

As an Area Sales Manager, Holmen will continue to offer dealer support and grow business within his territory through education and promotion of the BioZyme product lines. He will help conduct meetings and represent the company at trade shows while helping end-users meet their goals.

“It doesn’t matter how good producers’ genetics are, if their nutrition is lacking, they are going to have challenges. I’m looking forward to using my diverse background in production, reproduction and nutrition to help them identify different problems on their farms and help them find success in their programs,” Holmen said.

Holmen and his wife, Becky, have two sons, Ryan a high school senior, and Carter a high school freshman. They have recently refurbished a 150-year-old home on their family farm, where they enjoy raising livestock. Holmen enjoys community involvement and was recently elected to his local school board. BioZyme is known for its supplement brands VitaFerm, Sure Champ®, Vita Charge, DuraFerm® and Vitalize®. The company also manufactures and markets Amaferm®, the key additive in all its supplements. For a list of BioZyme Area Sales Managers, visit https://biozymeinc.com/our-staff. 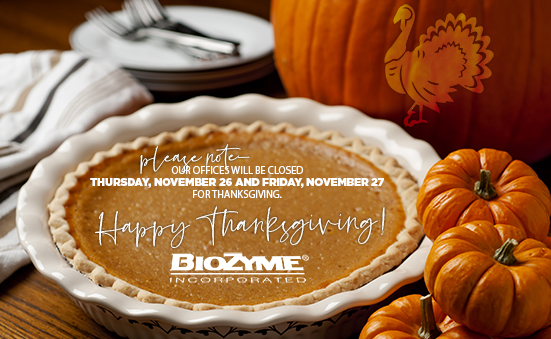 The BioZyme offices will be closed Thursday, November 26 and Friday, November 27 for Thanksgiving. We hope you and your family have a great holiday filled with family and food! We will resume our normal hours Monday, November 30.

At BioZyme we take great pride in our manufacturing facility and the products we produce. As with any manufacturing facility, maintenance occurs all the time and from time to time repair projects are needed. When you experience growth and a desire for continuous quality improvement, more intensive upgrades need to occur. It is in that vein that we share the news that BioZyme will be undertaking a significant plant improvement project.

What does this mean for you?

We have and will continue to work hard to meet your needs in every way that we can. Please feel free to contact your BioZyme representative, with any questions about this time. 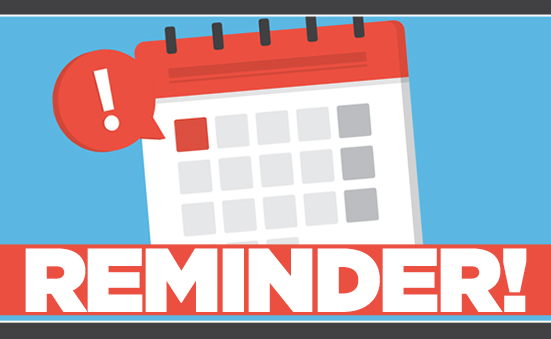 REMINDER!! If you are currently purchasing any Page 2 products, you will need to confirm receipt of our Minimum Advertised Price Policy. You can do this by clicking the confirm button in the email you received on July 9th.

If you are currently selling these products and did not receive the email, reach out to your ASM. 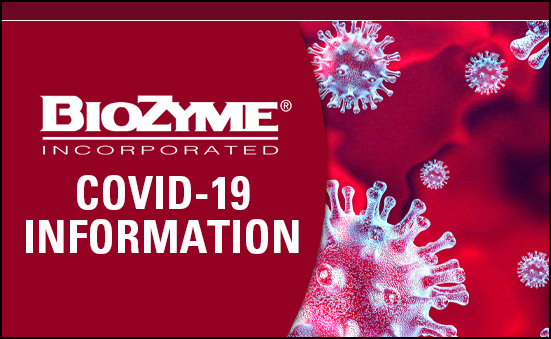 Below you will find important information about BioZyme’s response to the challenge of COVID-19. To ensure you receive any important updates, please sign up for our text alerts by clicking the link in the top right corner of the Online Dealer Center.

Official Government Issued COVID-19 Information:
We encourage you to be aware of the best practices outlined by the CDC and WHO in an effort to prevent the spread of illness.

Steps to Help Prevent the Spread of COVD-19

Important Information for BioZyme Dealers:
We understand the growing concern surrounding the coronavirus (COVID-19) across our communities. From the onset of this situation, we have been listening to the experts as we work to meet the challenges of this extraordinary situation. We are closely monitoring and following the guidance of the Centers for Disease Control (CDC) and World Health Organization (WHO), to ensure we are doing our part to keep everyone in our circle safe, but continue to be able to feed the amazing animals that ultimately contribute to our survival.

We are actively monitoring the situation and assessing risks and are ready to implement immediate changes to ensure a high level of safety and provide the best possible experience during this time.

Our employees, customers and business partners are the heart of our company and we look forward to serving your needs wherever and however you choose to engage with our products and services.

Vendor / Visitor Entrance
Vendors and visitors will not be allowed in the building unless:

Essential Employee Letter:
Employees that must come to the Stockyards or Easton facilities to ensure production of our products continues uninterrupted are being provided an essential employee letter to carry with them. Click Here to download the letter.
All employees who are able to work remotely are doing so, including the Sales Team, International Team, Outreach Support Center, Marketing Team and Office Support Staff.