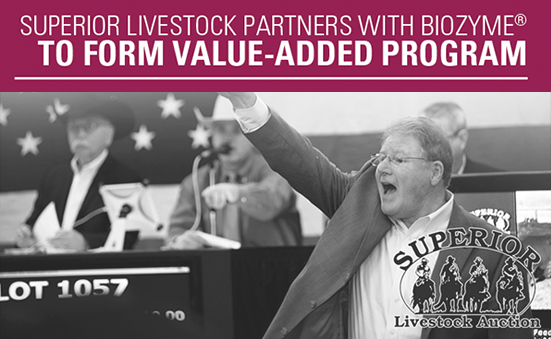 The leader in livestock marketing, Superior Livestock Auction, has teamed up with BioZyme® Inc., to add the first ever nutrition-based program to its list of value-added programs. The VitaFerm® Raised and Gain Smart™ programs will add value at marketing for those consignors selling their calves through Superior.

“Most of our consignors are using a mineral program already, and it made sense to partner with a progressive company who thinks like we do when it was time to choose a nutrition partner to add to our value-added programs,” says Jason Barber, Superior’s purebred division manager. “Since most consignors already feed mineral, this doesn’t cost our customers a dime. If they are already feeding VitaFerm or start feeding Gain Smart, they are going to see healthier cattle that bring more money.”

Producers work hard for their profit, and it makes sense to partner with a leading nutrition company to see faster gains while receiving premiums at sale time. More information typically means more profit for the producer. Healthy cattle gain faster, and cattle that have been fed a BioZyme product will handle stress and transportation more effectively while acclimating faster to a new environment.

Barber says BioZyme was a natural fit for the value-added partnership since BioZyme is a progressive company that also likes to create value for its customers and moves quickly to put plans into motion. Another added advantage is many of the producers who market on Superior already feed a BioZyme product. Barber adds that the great staff at BioZyme, from its nutritionists, marketing staff and sales force is another benefit. The two companies have been building relationships between staffs since some summer meetings to provide education about BioZyme products to the Superior reps. And those relationships can only grow stronger as BioZyme dealers reach out to the Superior reps in the area to work together to educate the producers about the benefits of VitaFerm Raised or Gain Smart.

“We encourage our customers to do business with companies that do business with us,” Barber says. “This is a partnership that is going to work and is going to be a long-term partnership. If there is ever a chance for us to add value and create a premium when a customer sells cattle with Superior, we are all about it. It doesn’t cost the consignor anything extra. They just check a box on their contract.”