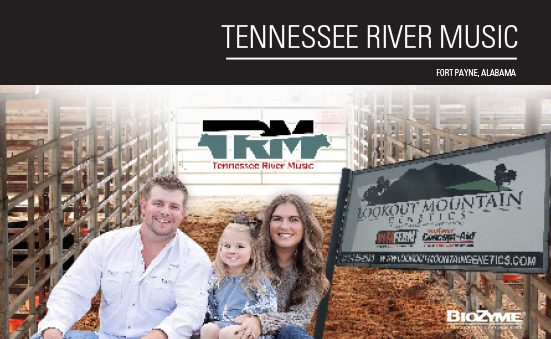 It is easy for Tennessee River Music to market and sell BioZyme® products. They have seen great success with many of the products on their own cattle enterprises, and John and Randa Starnes of Fort Payne, Ala. say the success they have had with the products helps sell them to other producers.

“If we didn’t believe in the products we wouldn’t use them or sell them,” Randa says.

John says they started selling BioZyme products nearly four years ago when they had seen positive results on their purebred Hereford and Angus operation. There wasn’t a dealer nearby, and the products they wanted were not always readily available. They decided to become BioZyme dealers so they would have the products on hand, and they could help other producers in the area secure a high-quality nutrition package.

“We are our biggest customer, but we have several smaller producers in the area that know we keep products on hand in our commodity shed,” John said. “We don’t have a retail store, but people know we are usually around if they need something, and as long as it isn’t midnight, I’ll help them load up what they need.”

John says Tennessee River Music’s customer base covers about a 100-mile radius, with a few customers further out. John, who has a master’s degree in ruminant nutrition, wanted to provide a service to area cattle producers while having another venue to network with them. Adding BioZyme products seemed like a natural fit.

John says the products really do sell themselves, and once a producer tries a particular product, repeat customers become the norm. At their bull stud, they put a 50 lb. VitaFerm® Concept•Aid® Protein Tub in each pen, something that bull owners from across the southeast take note of. He also says that this year, with the extreme heat and drought, the VitaFerm HEATTM mineral is a perfect fit for their operation.

HEAT helps their cattle shed off, tolerate the midday heat and is fed to their spring calving cows that are bred in the summer time heat.

“During this time of extreme drought, the protein tubs have proven to be a cost- effective way to add supplemental protein. This year, we have seen these products pick up in sales due to the ease of handling, where most people aren’t set up to handle loads of feed, and the devoid of pasture in our area,” John said. “When we start explaining to producers that it’s 20% natural protein that contains a mineral package that also includes Amaferm® and all of its proven benefits at a one pound inclusion rate, it really is a cost-effective option. We look at is as a three-in-one product – mineral, protein and Amaferm.”

Another favorite product is the Vita Charge® Stress Tub that John puts out for the first few weeks of weaning. He says these encourage calves to have a steady appetite, and in all the weaning seasons he has used them for, both the fall and spring calving herds, he has not had to treat a single calf for bloat or respiratory illness.

One product that John and Randa have found fairly simple to market is the 50 lb. Concept•Aid Protein Tub. John says a couple of factors play into that product’s popularity. First, the average herd size in their area is less than 25 cows. The tubs are the perfect size for the smaller producers. Next, many farms in the area rely on the wife to take care of the livestock while the husband works off-farm. The 50 lb. size is much more manageable for a woman than a 200 lb. tub. And finally, the popularity of raising and showing goats in the southeast has risen in the past few years, and the 50 lb. tub is just the right size for goat raisers according to John.

“Believe in the product you are trying to sell and know why it is better than brand X,” John said.