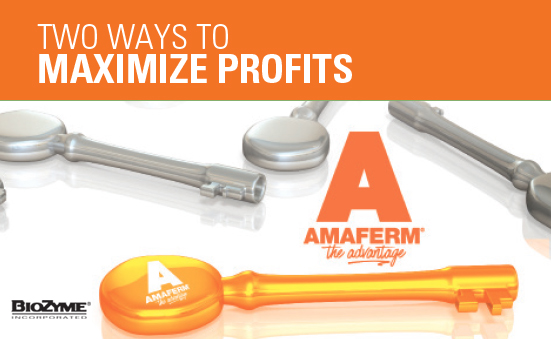 Listening to his customers’ goals and watching them learn from their experiences are two of the ways that Don Bush, manager at Powell Feed and Milling, tries to help his customers minimize expenses and maximize their profits. As a BioZyme® dealer in north central and northwest Arkansas, Don tries to use the proactive approach of reaching out to his customer base and identifying their needs.

The first way that Don helps his customers maximize profits is with one of his most popular products, the VitaFerm® 30-13% Protein Tub, which he says his customers appreciate as a complete mineral package.

“It offers a protein source that works really well in our part of the world, and it has a complete mineral package,” Bush said. “When compared to a traditional tub and bagged mineral program, it is more efficient. Research has proven that a higher percentage of cattle consume mineral on a regular basis when it is in a molasses-based tub versus a dry bagged mineral. So, more of the cattle get the mineral and protein they need, consistently. Consistency is very important in rumen health and efficiency. Amaferm® being part of the package is just like putting a supercharger on a good engine.”

Don says he is excited to market the new VitaFerm Cow-Calf Mineral as a second way to help his customers maximize their profits with a lower-cost option that still offers the Amaferm advantage. When his customers chose a lower-quality product, their cattle don’t perform to their expectations, and they soon realize that the Amaferm advantage saves them money in the long run.

“Amaferm is the key to the products,” Bush said. “The new VitaFerm Cow-Calf Mineral will give us a product to market to producers that offers cost savings without wrecking their cows. This mineral will allow producers to roll back when times are tight, and Amaferm is magic.”

Bush notes that there are multiple ways a complete mineral package saves producers money over time. With a product like Amaferm, producers see increased appetites, increased gains and more productive cows that breed back more efficiently. He adds that a good nutrition programs keeps calves healthy, which lowers vet and animal health bills.

“BioZyme has never had a low-cost option before, and this product should help those producers who want to save money,” Bush said. He hopes that more producers will take the proactive approach to implementing a quality nutrition program, even in tougher times. “This market has caused everyone to tighten their belts and cut costs. But a quality nutrition package will save and make producers money down the road.”