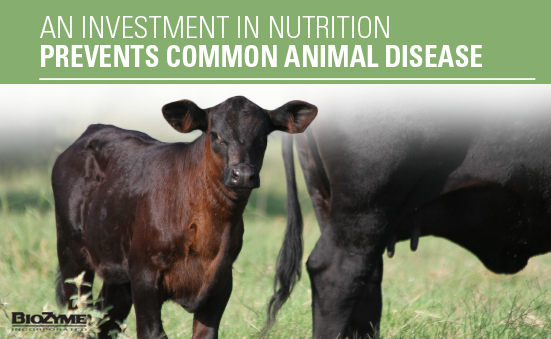 In a region of the United States where Anaplasmosis is a cause for concern in the cow herd, Bob Black doesn’t worry about his herd catching the infective blood disease that can decrease performance, cause weight loss, abortion and ultimately death loss. The fifth-generation cattle producer focuses on managing his herd’s immune system function and investing in a sound nutrition program. And in addition to ranching with his brother, he owns Elk County Veterinary Services at Howard, Kan., and has been a BioZyme® dealer for nearly 18 years.

The Blacks run a cow-calf operation in southeast Kansas where they concentrate on raising cattle with a high carcass quality to provide the consumer a safe and favorable eating experience. The brothers wean nearly 300 calves each year, and Dr. Black says he can’t remember treating any animals for Anaplasmosis since they have been feeding VitaFerm® products.

“We’ve been feeding VitaFerm for at least 25 years, and whatever we invest in pays off in the end,” says Dr. Black. “Amaferm does a great job of breaking down the forages, and the organic minerals keep the cattle’s immunity up.”

The cow herd on the Black’s operation eats a forage-based diet with minimal supplementation. However, the VitaFerm products they do feed offer maximum nutrition in key trace minerals of copper, zinc, selenium and magnesium.
In addition, Amaferm is a great resource to help break down the forages and convert them to energy.

Dr. Black has used LONGRANGE® to control parasites such as ticks that spread Anaplasmosis for the past three years. In addition, he manages their body condition score to keep cows between 5-6 BCS, with a goal of 90% conception rate. He says if the cows get too much condition, they lie around and don’t graze, and therefore are not as healthy.

“It all comes down to proper management and animal husbandry” Dr. Black said.

Although he has chosen to ward off Anaplasmosis by proactive management techniques, he does sell CTC to some customers. Dr. Black’s goal is to use his personal successes to demonstrate the Amaferm advantage to sell more BioZyme products.

“The uptick in the market the last few years has helped, but getting our foot in the door is the big challenge,” he said. “Once a client switches over, and they see the Amaferm advantage in their cows, they are usually hooked. We are seeing good conversion.”