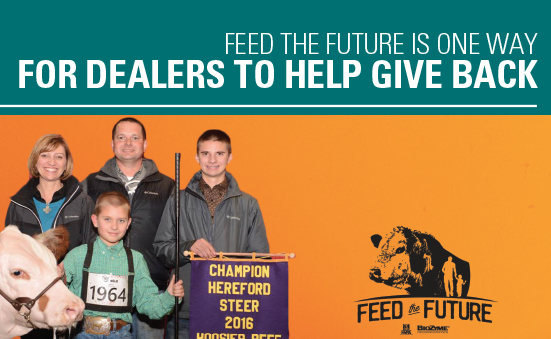 Two of the most fundamental business investments we can make are in our future and in our people. BioZyme Inc. has committed to investing in both of those areas with the creation of the Feed The Future partnership it formed with the Hereford Youth Foundation of America (HYFA).

“Bob and Lisa both feel it is import to make an impact on the next generation of agriculturalists and that is why this program was created,” said Crystal Blin, Marketing Program Manager.

For every receipt BioZyme receives from select VitaFerm® products, BioZyme will donate $1 to the HYFA, with a goal of making a $100,000 donation in October 2017. American Hereford Association members and commercial producers who use purebred Hereford bulls are encouraged to send in copies of their receipts or invoices, and Blin said they can submit receipts as far back as Sept. 1, 2016.

In addition to the program being a great way to make a difference in the young people involved in agriculture, Feed the Future can serve as a great marketing tool for dealers.

“Because most Hereford breeders are extremely passionate about HYFA and supporting their junior members, dealers can mention the Feed the Future program to breeders and it can be a great way to start a dialogue and potentially gain new business,” Blin said.

As of May 1, Blin has collected copies of receipts from Hereford enthusiasts and dealers, equating to nearly $4,800, noting that several dealers will send in the receipts for their customers.

“I will send in the copies of my customers’ receipts for them so it is not an extra burden, yet they feel like they are giving back and helping the youth,” said Sue Kline from The Feed Bunk in LeRoy, Ill.

Kline adds that she typically sells a lot of VitaFerm, but that she has promoted Feed The Future in her store and on social media, and encourages other dealers to do the same to promote the program. All people want to support youth in agriculture; it makes them feel good she said, and so letting them know that their purchase of particular products might help the youth will help spur sales.

Blin said there are several ways to market VitaFerm products while promoting the program. She suggests asking the customers who use Hereford genetics if they do use VitaFerm products, and if not, to consider making the switch, knowing a monetary contribution would be made to an organization the producers are passionate about. Next, she said if they are only using Sure Champ® or they don’t use a VitaFerm product year-round, they might be interested in learning more about qualifying products like Concept•Aid®, Heat™, Cattleman’s Blend™, 30:13% Protein Tub, Roughage Fortifier® and Sure Start® Pellet.

Overall, Feed The Future is a win-win-win program for the youth, the producer and the dealer. The youth of the Hereford breed are receiving a great donation, the producer is keeping his or her animals healthier and gaining and the dealer is increasing sales and building relationships.

To learn more about this program, visit www.vitaferm.com/feedthefuture.