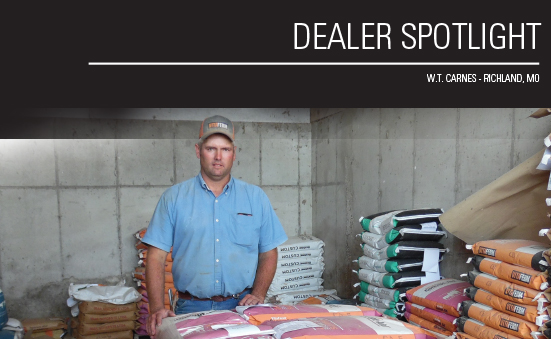 In the heart of the Ozarks, there’s a BioZyme® dealer enthusiastic about the product he sells and the people he works with. W.T. Carnes said he’d been feeding the products to his dairy cattle for several years, and in the fall of 2013, decided to become a dealer.

He has taken initiative to grow his business, and says his sales have doubled every year since he started selling products. As an on-farm dealer, he embraces a basic business principle – making a sale is as much about who you know as it is the products you’re selling.

“People buy from people they know,” Carnes said. “My sub-dealers know more people than just the people I know. They can help me move more tonnage.”

Carnes currently works with five sub-dealers, friends that he said used and believed in the products, just as he did. Two of them live within 30 miles of him, but the others are quite a distance from him, expanding his network and opportunity for growth even more.

“The products really sell themselves. Once a producer hears about the products and tries them, they are usually hooked,” he said.

Carnes said he didn’t always have a network of sub-dealers, but his former ASM, and now Key Accounts Manager, Ken Gillig suggested sub-dealers would be a good way for him to grow his business after being a dealer for almost two years.

Carnes, who recently completed the Master Dealer Training Program, said another valuable tool to growing sales is hosting a producer meeting. He hosted his first meeting last fall, and sold a semi-load of mineral that night. He said that everyone that attended the meeting became a customer or has continued buying from him. The producers appreciated hearing from Mike Wadle, Director of National Sales – North, and being able to ask questions to further understand the products.

Currently, VitaFerm® HEAT®, Concept•Aid® and Gain Smart® Stocker mineral are his best-selling products. He offers two pieces of advice to newer dealers and their sub-dealers looking to grow their business, “If you can get producers to try the product, it will sell itself.” And he suggests keeping inventory low to promote freshness of the product.

A sub-dealer network has helped W.T. continue to grow his sales the past few years by multiplying his efforts and his reach all because of relationships he had with others who use and believe in the products. Are you ready to expand? Perhaps creating a sub-dealer system is the next step for you. For more information about reaching out and working with sub-dealers, contact your ASM.