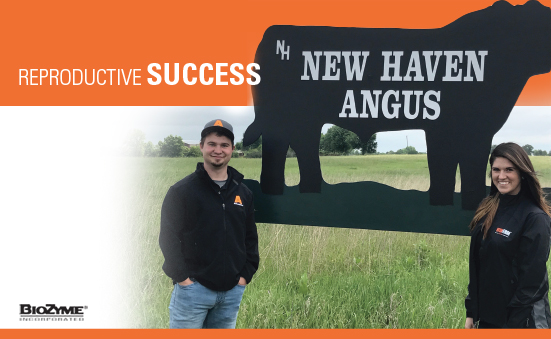 Reproduction is the most influential factor on beef cattle profitability. Since reproduction is a lowly heritable trait, environment plays a huge role. Environmental factors that have been proven to increase conception are: energy consumption and body condition score, protein consumption (both as a protein requirement and as improving energy status via rumen fermentation), mineral  and trace mineral status, and body temperature (fever has been shown to increase embryonic fatality).

Most cow-calf producers sell calves at or shortly after weaning. This management system places emphasis not only on the number of calves born and raised to weaning age, but also the weight of the weaned calves. Calf nutrition is a major influence on weaning weight. Dam milk production, calf health and forage consumption are that major sources of nutrients for calves.  Calves have nearly twice the protein requirement as their parents on a percent of diet basis. This requirement along with energy greatly influence the selling weight of calves.

Amaferm®, a natural prebiotic obtained from the proprietary fermentation of Aspergillus oryzae, has been shown to have positive effects on intake, digestibility and nutrient absorption. Amaferm’s mode of action has been shown to increase the feed particle attachment sites for rumen bacteria, enhance the growth of rumen fungi and bacteria, to increase the digestibility of a wide variety feedstuffs into energy and microbial proteins along with increasing nutrient absorption. In addition, documentation indicates that Amaferm reduces rectal temperature of cows during the hottest months of the year that coincide with normal breeding months of spring-calving cows.

Testimonials from cow-calf producers indicate high conception rates and earlier breed-up dates when cowherds are maintained on VitaFerm® Concept•Aid® containing Amaferm, high levels of organic trace minerals, and adequate phosphorus. Despite the amazing number of testimonials, data to support their anecdotal responses has not been collected.

This summer we conducted a Reproductive Success data benchmark study. The project was directed by Dr. Twig Marston with the help of summer research intern Mason DeVooght. They collected reproductive and weaning weight data from customers who feed the Concept•Aid products. The data will be compiled into an online database that will allow us to prove the advantage of feeding Concept•Aid with the Amaferm advantage. Using this data, we will be able to assist our customers in making better management decisions as well as identifying factors that will enable us to further develop the Concept•Aid product line.

If you have a customer that you would like to see included in this study, please reach out to your ASM to participate.