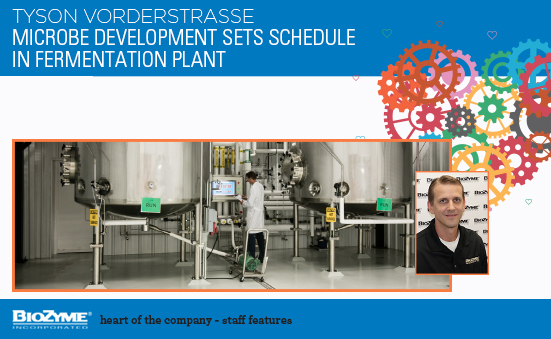 For Tyson Vorderstrasse there isn’t a typical work day or an 8-5 shift. The Director of Fermentation for BioZyme® oversees the growth and development of the cells that make up Amaferm® and AO-Biotics®. And although the fermentation plant only runs one shift per day, there isn’t a “normal” routine for each day. What needs done today, must be done today because if it doesn’t get done, then tomorrow won’t happen.

“We are flexible on our hours because microbes grow 24/7; they don’t go home,” Tyson said, “They have got to have what they need when they need it.”

Tyson has an extensive background in microbiology and the fermentation process. He grew up on a farm in south central Nebraska, and always took an interest in science, including the mechanical side of science. He earned a Bachelor of Science degree in Biology-Health Science Emphasis with a Chemistry minor from Missouri Western State University, and his senior year of college was given an opportunity to intern in a lab of a fermenter operation in microbiology. He said out of four interns, he was one of two offered full-time jobs, and thus began a career in fermentation.

Fermentation is really the initial step in developing the Amaferm, the key ingredient to every product that BioZyme markets. But fermentation doesn’t just happen.

Each week Tyson sets a schedule of what needs to be produced for the week, mixes and sterilizes media for the next batch, prepares and steams lines for the harvest, assures accurate water filtration, and makes sure the totes are ready to contain the blocks that will be harvested. There is also extensive data entry and records to keep. And of course, maintenance and cleaning the equipment is of utmost importance.

From fermentation to drying to bagging, it takes approximately five days to produce a batch of Amaferm.

With 3 ½ years with the company, Tyson says he enjoys the process that he is involved with each day, and the ability to be heard in a smaller company. He said having a hand in setting up the process and knowing it works and the ability to make suggestions on improvements and adjustments makes his job enjoyable.

“The work force and the leadership are very dedicated to the company. You matter, the workers matter and the outcome matters,” he said.