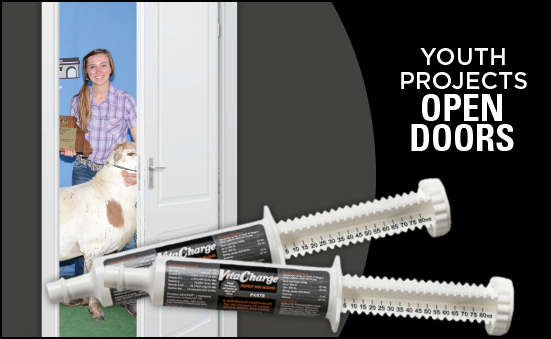 For 25 years Don Bush, Powell Feed & Milling, knew Ken Gillig and competed against him in the world of animal nutrition. Gillig, the BioZyme® Key Accounts Manager since 2016, was formerly an ASM, and Bush had been selling Purina through Powell Feed & Milling in various stores in Northern Arkansas.

However, at the 2014 Missouri State Fair, the friendship between Gillig and Bush became even more important when Bush’s daughter’s ram got very sick in the breeding sheep barn. Bush recalls that Gillig told him he had something he wanted him to try.

“Ken brought back a half-dozen Vita Charge® Gel tubes with a note on how to give them to our ram,” Bush said. “I told my daughter, ‘I don’t know what this foo-foo dust is, but it’s better than having a dead ram.’ Two days later he won the open sheep show.”

After that experience with his daughter’s prize-winning sheep projects, Bush knew there was something about the BioZyme products that worked. He helped Gillig get some supplements to producers down around him and told his boss he wanted to introduce the products into the Powell Feed Stores. Skeptical about the price of the products, he agreed. And Powell Feed & Milling has watched its BioZyme product sales grow, all while reaching VIP Dealer status each year.

“I knew it worked for us. I knew it would work for others,” Bush said.

Bush’s situation is a perfect example of why reaching out to young livestock exhibitors and sharing products are effective ways of promoting the products. If Gillig hadn’t shared the Vita Charge products with him, his daughter might have had a dead ram. And furthermore, BioZyme might have one less VIP dealer who has helped the health and performance of many producers in a large part of Northern Arkansas.

Don’t discount the youth exhibitor. They might buy a bag or a bucket of Sure Champ® products. Or maybe a young equestrian uses the Vitalize® products. However, those youth likely have parents who own livestock or a business who could be positively impacted by the BioZyme products as well.

Potential opportunities are everywhere. Ken Gillig seized the opportunity to help a young sheep exhibitor at the Missouri State Fair. But what he ultimately did was help grow business and change the lives of many livestock producers for years into the future.