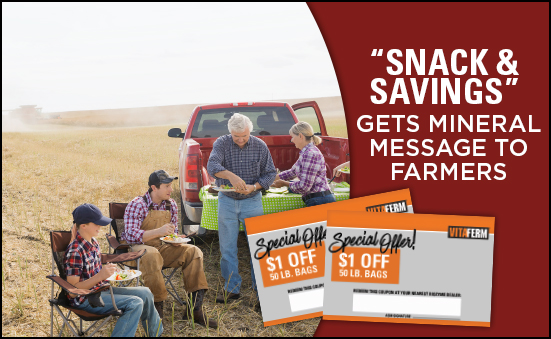 Nebraska ranks second in the nation in total cow-calf production, only behind Texas. However, when late spring and early summer roll around, most farmers and ranchers have just one thing on their minds – planting and irrigating crops. Taylor Ruether, Area Sales Manager for Nebraska, was working with a few of her dealers to come up with an innovative way to get in front of farmers during their busy season, when the “Snack & Savings” approach was created.

“One dealership gave me the idea to do this, because I was wanting to work with him, and he kept saying, ‘It’s farming season, you can’t catch any body right now.’ So, I was trying to come up with a way to get in front of farmers during their busy season,” Ruether said.

Snack & Savings gave Ruether and her dealers the opportunity to get in front of farmers – bringing them either a sack lunch that included a sandwich, chips and a drink, or a mid-afternoon snack of a cold-drink and either a bag of chips or a candy bar. Included with the snack was a product guide and a coupon for any VitaFerm® product.

Ruether made this opportunity available to any of her dealers who wanted to set up appointments to meet with customers and potential customers. She had a couple of dealers who really grasped the concept and spent a couple of days with a cooler of water and sodas and met with farmers to remind them about summer mineral programs.

“We felt like it was a good way to give back to farmers when they are crazy and hectic, and it did get most of them to stop and talk to us, even if it was just to remind them about BioZyme. No one usually turns down a pop and a bag of chips. The beautiful thing about this promotion is, if someone didn’t use the coupon, it didn’t really cost anything,” she said.

The Snack & Savings trips were a good investment in time. Ruether said that dealers did make some Sure Champ® Extreme and VitaFerm® HEAT® sales while talking to the famers. Follow-up appointments have resulted in interest in the VitaFerm® Gain Smart® program.

Ruether will work with her dealers again on similar promotions and marketing efforts, taking the message to the customers. She feels the efforts are worthwhile and she will encourage more dealer involvement. She also learned that chips are the preferred snack over candy bars.

“Anytime you do stuff like this, the more people expect it, and the better response you have. We’ve had some follow-up, and that was worth our time and effort,” she said.