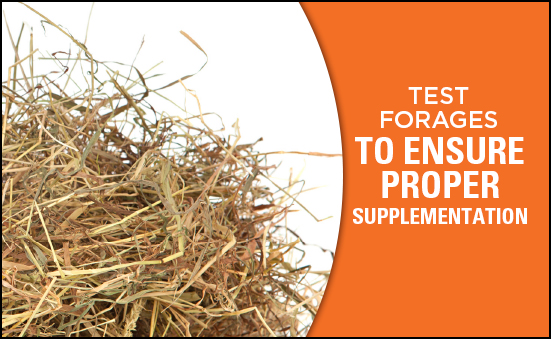 Some livestock producers will tell you they are forage producers and they simply raise cattle to have animals to consume the forage they produce. But it doesn’t matter if you raise hay for your cattle or cattle to eat hay, the most important thing to know is the nutrient content of the harvested forage you have on-hand before fall sets in and turns to winter.

Typically, by late August all the hay is put up, has had time for the moisture to level out, and it is an ideal time to start testing hay for nutritional content. Kevin Glaubius, Director of Nutrition for BioZyme® Inc., offers some key advice to identifying the forages you have on-hand and getting them tested.

First, Glaubius said it’s important to identify your hay by a lot number so you know which test results are from which lot. Glaubius said a lot is defined by the field and the cutting it is from. For instance, a lot from the second cutting from field one would be named Lot 1-2. A first-cutting sample from the third field would be 3-1. It is important to identify the lots when you haul them from the field and store them and continue to know where they are kept. A year of drought like this year, might result in only one cutting, therefore all lots would be dash one, or you could just name the lots by field name or number.

Once the lots are identified, it is time to collect samples. Hay testing and ration balancing are complimentary services provided by BioZyme. Contact your Area Sales Manager or local BioZyme dealer for assistance in collecting the sample. Having an accurate sample is the key to a successful sample. Glaubius recommends taking 10 sub-samples from each lot and mixing them together to get one sample to submit.

“Where it is a real struggle for the nutritionist to work with the producer is when the producer doesn’t keep those lots separate. They bring all their hay from all fields and all cuttings and they are not identified,” Glaubius said. “This makes it really hard when they do that to help them to put them put together an efficient program and tell them to feed this hay first, this hay second, this hay third. If they can put them in rows so they are accessible to feed them from a nutrition standpoint, and not so they are just accessible with their loader, it helps. Some customers will spray paint a lot number on their bales to make their mix the most efficient.”

Once the Area Sales Manager or dealer submits the forage for testing, the results are typically generated within a week, indicating any deficiencies in energy or protein. In addition to knowing the nutrient content of your forages, it is also important to know the amount of each lot of hay you have when working with the BioZyme Nutrition Team to plan your next steps.

“We need to know the number of bales you have in each lot, so we can help you plan. We look at number of cows you have compared to the amount of forage available, and plan for estimated intake. We want to ensure you are using the right product, a protein mix to supplement, either from BioZyme or from your local grain elevator. That way, you don’t have to guess if it is time to start feeding protein or extra energy,” Glaubius said.

After the tests are analyzed and interpreted and the protein and energy needs are determined, there are four key ways to supplement proteins using the Amaferm® advantage. Amaferm is a precision prebiotic designed to enhance digestibility by amplifying the nutrient supply within for maximum performance.

Feed mineral with Amaferm. Get the most out of what your cows are consuming by increasing intake and digestibility. This is the least expensive option at approximately 5 cents per cow per day.

Feed VitaFerm® Concept•Aid® Protein Meal. This is a granular, free-choice mineral. In addition to the mineral, supplemental protein is provided.

Feed VitaFerm Concept•Aid Protein Tub. The tub provides the same nutrition as the protein meal but adds the convenience of the tub form.

Feed VitaFerm 30-13% Protein Tub. This VitaFerm product offers the highest level of protein, but vitamin and mineral levels for maintenance during times of year when nutrient requirements are not as high.

Forage testing is a management practice that helps you plan ahead to make the best nutritional decisions for your herd. Testing now will help you know which forages you need to feed during which stages of production and the proper amounts of protein and energy you need to supplement during those times. The more you know, the more money you could save your operation.