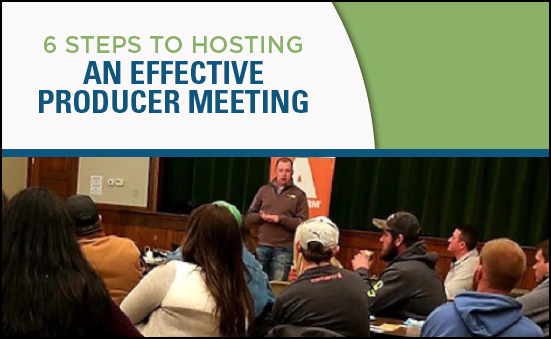 Producer meetings are a great way to share your business story, bring together people of common interests, renew enthusiasm in loyal customers and gain new customers all in one setting. However, effective producer meetings don’t just happen with a phone call or text to your Area Sales Manager (ASM); they require some advanced planning in order to become more than just another social event.

“It’s evolved. The first time I had one as a new dealer, I didn’t even have product on hand and the next day I sold a semi-load of product. Now after some meetings I sell up to eight semi-loads or more within a couple weeks after the meeting,” said Keith Micke, Triangle K Feed at Glendo, Wyo.

Micke hosts two large producer meetings each year, spreading them out over his sales territory. He shared some of his what he’s learned over the years that helps make his meetings successful.

1. Schedule in Advance. It is a good idea to get dates on a calendar as early as you can. That way you can start working with your ASM and the marketing team to get invitations designed and mailed, reserve space at a restaurant or other venue of your choice, and make sure the BioZyme® staff you want to speak are available on your dates.

2. Plan your Invitation List. Micke said he likes to invite a mix of both his regular customers and potential customers to the meetings. He will ask his long-time customers to share their success stories during the meeting, and it is always good to have a well-respected, prominent rancher in attendance, because he said often a new customer will try the products because he or she wants to be like the neighbor.

“That’s really solid. They are getting the information from someone besides a salesman, how the products work and what it’s done for them,” Micke said.

Micke said he will send around 80 invitations each fall for his two meetings, where he usually has around 30-35 people at each one. And since ranching is a family business, he also includes the wives and children, as he knows many young families don’t always have access to a sitter.

3. Focus on a Topic. Although there are a lot of subjects a dealer could cover, Micke said he typically picks one topic to cover at each meeting, and then follows the topic by explaining all the products and highlighting any new products or changes. Narrowed down topic subjects might include how Amaferm works or the importance of protein.

4. Educate with Fresh Faces. Micke likes to include outside experts at each meeting.

“I get a lot of benefit having my sales manager and a nutritionist there. Then they can learn about the research, and the ranchers know there’s more than just a dealer out there. They bring in a fresh face, a different look,” he said.

5. Be Flexible. Micke said he is always up for trying new things. He originally had two fall meetings and two spring meetings each year. Then he discovered that the ranchers were busy calving in the spring, so he quit having those. He has had some smaller dinner meetings with four or five customers with similar interests. And, at his larger producer meetings, he has even seen ranchers eating at the same restaurant who weren’t invited to his meeting. He pulled them into the meeting, bought their dinner and turned them into customers.

6. Follow Up. At the meeting, you will want to keep track of everyone who attends, either by way of a sign-in card or sheet. Make sure you have their phone number, email or address so you can follow up with them. It is said it takes seven touch points to make an impression. You’ve likely already made a few with the invitation and the interaction at the meeting. Be sure to give them a day or two, follow up, answer any questions and see what products they would like to buy from you.

“It’s become a social event for a lot of guys now because they get to see the other ranchers there, and they really enjoy it,” Micke said.

Yes, your producer meeting can be effective AND enjoyable at the same time. Remember a worth-while producer meeting is a way to increase your customer base, show appreciation to your existing customers, and be a great educational forum.

As you make plans for your next effective producer meeting, be sure to reach out to your ASM.