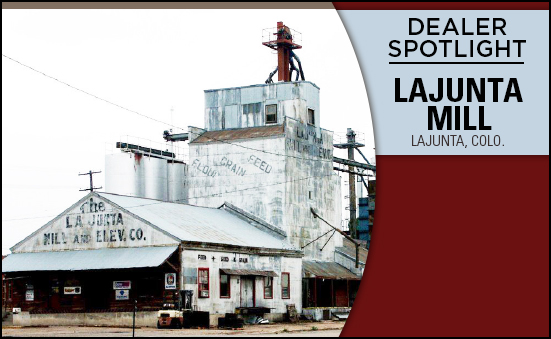 Some people learn about the Amaferm® advantage from feeding one of the many supplements BioZyme® offers. Others read educational material, visit the website and/or ask questions of the Area Sales Managers. And yet, a select group run their own trials so they can experience and witness the benefits first-hand. That’s the case for Cody Stoker, who co-manages LaJunta Mill, LaJunta, Colo., with his brother.

About 10 years ago, LaJunta Mill received a request for a custom show ration with Amaferm added to it, according to Stoker. Unfamiliar with Amaferm, he started doing some research, comparing it to other additives from other companies he had used in the past. Once he saw the results, he was hooked, and has been mixing Amaferm into all his ruminant feeds as well as some horse feeds.

“You see those animals really get a healthier look, and you know if they look healthy on the outside, they are healthy on the inside. I have also seen a reduction in feed intake, especially dry matter intake,” he said.

Stoker has been feeding a custom mineral tub he developed for the Mill with Amaferm included in it for about the past five years. He uses the tub while feeding free-choice cane hay to mature cows. He said he sees a reduction in forage consumption while those cows maintain their body condition score, therefore he knows his cows are getting the maximum nutritional benefits from the Amaferm.

Stoker uses computer software to assist him when it comes to formulating the Mill’s custom mixes and its own brand of feeds. He has been around livestock his entire life and understands the importance of a precision-based prebiotic like Amaferm that aids in intake, digestibility and absorption.

In addition to feed, custom mixes, tubs and show rations, the Mill also includes Amaferm in some of its range cubes. He has one producer who feeds the range cubes to his cows and has seen tremendous response to his cows’ nutrition at calving time.

The biggest challenge Stoker has with suggesting Amaferm as an additive in a custom-mixed feed is the price tag producers see for the bulk order.

“They shy away due to the overall cost when they see a product with Amaferm in it. But if they would do the math and break it down, they would see it’s only costing them about two cents per head, per day,” he said.

A simple suggestion by a customer led one leader at LaJunta Mill to dig deeper. With a little research, some trial and error, Stoker discovered the benefits of Amaferm on his own animals and knew this was a secret he needed to share. Progressive dealers like LaJunta Mill care about their customers and their customers’ animals and that is why they choose Amaferm as a trusted additive for their products.