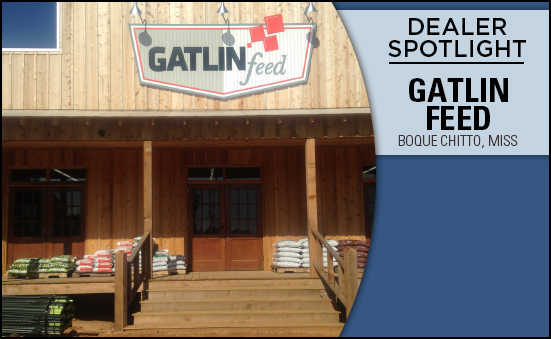 At your first glance at the Gatlin Feed website, you would presume this business is a fullservice farm store that specializes in livestock feed and nutrition and a full gamut of farm supplies for every specie. And, they do. But their real specialty is making people’s lives easier.

“I’m in the service business. Everybody wants their life to be easier and that is what we try to do. We don’t promote anything I haven’t used. If I don’t think it works, I would never sell it,” said Jeff Gatlin, owner of Gatlin Feed based in Boque Chitto, Miss.

Jeff has been providing service and selling feed to his customers for more than 40 years. His dad, Charles, started the family business when he started mixing his feed for his cattle, looking for a consistent product that worked year-after-year. His neighbors noticed the higher-performing, healthier looking cattle, and the elder Gatlin was now in the feed business.

Jeff purchased his dad’s share of the business about 15-20 years ago, and just a few years ago started adding Amaferm® into a feed he was giving some cattle he was backgrounding. He noticed a marked difference in efficiency and growth and became a BioZyme® dealer soon after, continuing to add Amaferm into some of the cattle and wildlife feeds his mill makes as well as selling the other supplements to his customers.

Gatlin markets a deer ration with Amaferm to several breeders in the South. He said the conception rates on their does have increased considerably, and the overall health of the deer has improved since including Amaferm in the feed. At the Whitetails of Louisiana breeders’ show the past two years, customers on Gatlin’s deer feed have taken four of the top five awards in antlers and deer size.

“Those awards have helped improve our sales. We are competing against the Purinas and Nutrenas, and it’s pretty neat being a Tier 2 distributor manufacturing our own feed. It’s pretty neat when your product does as well or better,” Jeff said.

In addition to the cattle and deer feed, Jeff also has a growing market for the Vitalize® High Performance mineral. He has several race tracks and breeders in south Louisiana that have been pleased with the product, and he continues to grow within the equine market.

“I’m a visionary, and I see way out sometimes. And I’m real adamant about growth. I feel like if you’re standing still, you’re going backwards,” Jeff said. “I’m a hustler and whatever that takes to get the work done, I’ll do it. If it means loading up mineral on a Sunday afternoon to make a delivery, I’ll do it, even if it means driving 250-300 miles. Usually I find that will turn into additional business. Ten times out of ten, it does.”

When Jeff makes his Sunday afternoon deliveries, he usually will call ahead to see what products besides mineral the customer might need. If a producer needs mineral, they might also need fencing supplies, a feeder or some other farm equipment that Jeff can sell them. And when he delivers it on a Sunday, he’s providing service and making their lives easier.