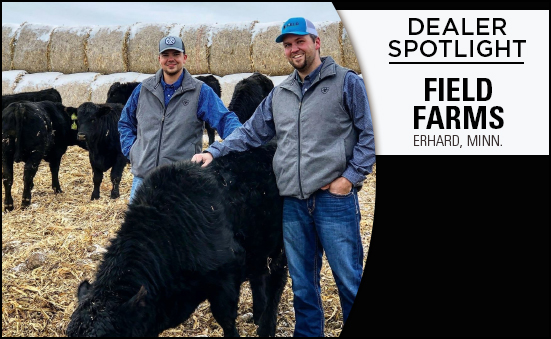 BioZyme® dealer Mitch Field at Field Farms shares his own personal success stories with the products to gain the trust and business of potential customers. He and his family had positive experiences with the VitaFerm® products on their Angus operation in Erhard, Minn., but the closest dealer to him was 100 miles away, so Field decided to become a dealer. He started sharing his success stories, has conducted producer meetings and has taken his message to social media, all while watching his business grow during the past two years.

“The biggest challenge for me has been getting people on a strict mineral program. But I’m working to get them feeding it all year, so it is better for their cows too, and some of them are starting to come around,” Field said.

In an area where farming is the dominant profession and most producers have less than 50 head, Field said getting them on a year-round program has been a battle. However, when they see the benefits of the Amaferm advantage, they are starting to realize the importance of providing excellent nutrition to their herd all year.

Field said he promotes the mineral program by seasons and production cycle. When he and his family only had to treat one sick calf out of 150 at weaning after using Vita Charge® Drench and Stress Tubs, that definitely grew his customer base. He has his producer meetings in the fall just prior to weaning to sell the benefits of the Vita Charge program. He also notes with the humidity and the number of lakes they have in their area, the VitaFerm HEAT® mineral has been easy to sell.

“With where we live in Minnesota, we run into a lot of fly issues in the summer, so I tell people about the HEAT mineral. Once they try it, they really like it, and they don’t have to worry about pinkeye issues either,” Field said.

Though his own experiences have helped him educate producers in his area about the benefits of a high-quality mineral program, he’s also gone a step further, and shares some of his experiences on social media. He shares his personal experiences on Twitter and said that he’s had a few other cattle producers reach out to him about mineral programs. He was able to refer them to BioZyme dealers in their area, and at least one purchased product.

“I always have people ask certain things. Since I’ve had good luck with the product, I share personal experiences with my followers,” Field said.

Educating others on the value of the mineral program is key; however, the biggest benefit to becoming a dealer is the personal network that Field has made. He said he has made connections with people in his own area he didn’t even know raised livestock and made valuable friendships with other BioZyme dealers and staff that he looks forward to talking with on a regular basis.

“I’ve made some good friends along the way. I talk to Keith Micke (Dealer in Wyoming) about once a month and Rowdy Pope (ASM in Florida) about once a week.”

For Field, it’s more than a mineral program. Being a dealer has allowed him to share his experiences, help others help their herds and cultivate friendships and connections along the way. That’s care that comes full circle.