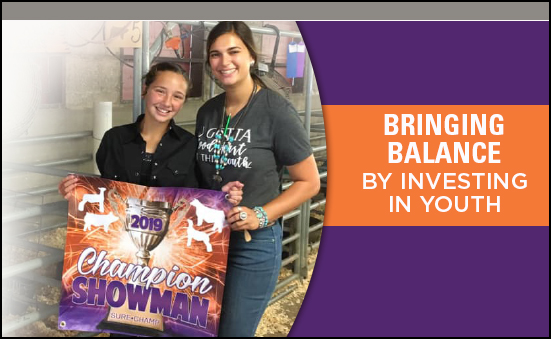 Getting involved. Giving back. Sharing a passion and her knowledge. These are all actions that have helped Riley Faris, Pueblo, Colo., get her business going during her first summer as a BioZyme® dealer.

Faris, who was involved in youth livestock projects growing up, has stepped up as a volunteer the past three years at the Pueblo County Fair in Southeast Colorado. She showed at this same fair as an exhibitor, and now enjoys coming back as a volunteer, assisting the swine superintendent with the hog show including duties ranging from weighing in the pigs, to breaking classes to helping manage the show on show day.

“I’m trying to help the youth with showing and to learn how to take care of their animals. Coming from an agricultural background, it is important to instill in the youth the importance of agriculture and the role it plays in our everyday life. Plus, when I was growing up, I had a lot of people help me, so now that I’m older I want to return that to the younger kids,” Faris said.

Faris is not only helping youth understand the importance of agriculture and assisting with the annual hog show, but she is also trying to teach the young exhibitors and their parents the importance of keeping their animals healthy with the use of a good nutrition program. As a newer BioZyme dealer, she takes the opportunities of being at the Pueblo County Fair and other surrounding livestock shows to discuss the Sure Champ® line of products and the Amaferm® advantage.

At this year’s Pueblo County Fair, Faris was able to sponsor showmanship awards for the Grand and Reserve Champion showman of each species, while promoting the products that help their livestock stay on feed and water and keep healthy.

“This year because of BioZyme and all of the support they offer, I was able to get showmanship banners for hogs, sheep, goats and beef.

I am also giving each of the winners a little goodie bag with some additional fun things and added information about the Sure Champ line, specifically designed for show animals,” she said. “The kids were so excited. Typically, the grand and reserve champion animals get banners, but they have to give them to the buyers, so the kids were excited they got to bring their showmanship banners home with them.”

In addition to the awards she provided at Pueblo County, she sponsored awards for the Grand and Reserve Grand Market Animal classes at the neighboring Otero County to Fair. Both sponsorships led to product awareness, and with the county fair and state fair about a month a part in Pueblo, she said she sold some additional Sure Champ between the county fairs and the Colorado State Fair.

“The most rewarding part is watching the new kids that come up through the programs or the kids that reach out to me and watching them succeed and seeing the look on their faces when they know they have accomplished something,” Faris said.

Although Faris genuinely enjoys watching the youth grow, learn and succeed, she knows that being involved in the local shows has created awareness for her business, and helped increase her sales.

“Give a little bit of yourself and your time, and people will start supporting your business,” she said.