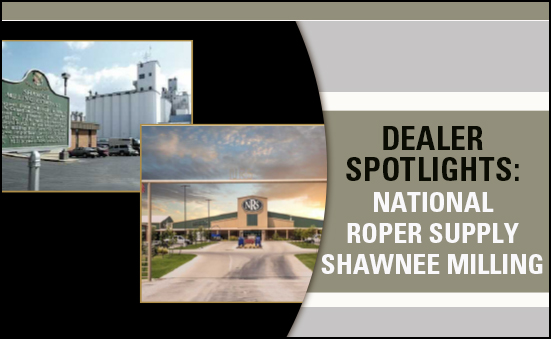 This month we shine the spotlight on two individuals who represent themselves and their respective dealerships as outstanding ambassadors for the Vitalize® line. Later in March, you will have the opportunity to hear from these men as they share their passion for the Vitalize products, how they position the products to their customers and some of the benefits their customers like too.

James Smith has been involved in agriculture his entire life, starting from a very young age. He grew up in Washington state, Oklahoma and Texas, where he graduated from high school.

Horses have always been a part of his life, and he started roping calves and team roping when he was 15. He learned to shoe horses as a way to pay his rodeo entry fees and to help finance his way through college. He graduated from Oklahoma State University in 1984 with a bachelor’s in Agriculture. He was a member of the OSU rodeo team and was the team captain his senior year.

After graduation, he began his start in the feed business, working as a salesman in central Oklahoma for ACCO Feeds, selling equine, swine, cow-calf and stocker feed; however, his emphasis was working with dealers and the dairy industry. He started his career with Shawnee Milling in 1994 as territory manager, covering Oklahoma and the Texas panhandle and still sells dairy, cow-calf, stocker and equine nutritional products.

Horses remain a passion for James. His wife Dawn’s parents are heavily involved in the Quarter horse breeding business with Belle Mere Farm in Norman, Oklahoma, standing great stallions like Easy Jet, Bully Bullion, Mr. Eye Opener, Marthas Six Moon and many more. They often breed as many as 1,200 mares a year.

James and Dawn live in Dibble, Oklahoma, where he still sells feed and enjoys team roping. He says he has three of the best horses he has ever ridden. They also own a commercial cow-calf operation, using Angus, SimAngus and Hereford Bulls. Their family includes two grown and married daughters, one granddaughter and one more on the way.

Jason Brooks is the Vice President of Marketing for the National Roper Supply, headquartered in Decatur, Texas. A Texas native, Jason attended Texas Tech University where he received his Master’s of Business Administration and bachelor’s in Finance and Business Economics.

Jason started working at NRS in 2007 as the Head of the NRS Buying Team before moving into his role as VP of Marketing.

Growing up, his family ran a purebred cow-calf operation in Texas where he developed his passion not only for the cattle industry but the equine industry as well. While at Texas Tech, Jason trained saddle horses and team roped; to this day he is currently still a competitive team roper.

Jason and his family reside in Krum, Texas, where they are actively involved in all aspects of the animal agricultural industry. He is a proud stock show dad and thinks there is no better place to raise his family than on the back of a horse and in the showring.

Be sure to tune in, March 18 to learn more about Jason and James, their enthusiasm for the equine industry and how they market and position the Vitalize products to their customers. We are blessed to have industry professionals that use and understand the products that work as dealers in our network, providing care that comes full circle.