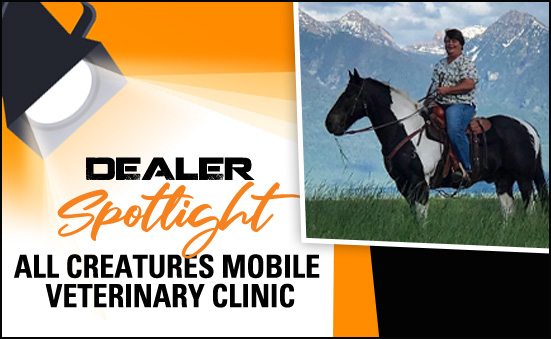 Seeing is believing. And that is exactly what happened in 2010, when Beth Blevins, DVM, and her daughter Michaela experienced their first BioZyme® products at the National Junior Angus Show in Denver. Michaela had hauled a steer and heifer two states south of her native Montana and as luck would have it, her steer decided to quit eating.

“Dennis Delaney was working the BioZyme booth and gave us some Vita Charge® capsules to try on him. He went back on feed and started drinking. We saw some impressive results. That fall Dennis came to Montana for some meetings, and we decided to sign up as dealers,” Beth said.

Beth and her husband own and operate a registered Angus ranch near Ronan, Montana, and Beth is also a veterinarian, owning All Creatures Mobile Veterinary Clinic. She specializes as a large animal veterinarian and says that the precision nutrition that BioZyme offers helps her help her clients.

“VitaFerm ® Concept•Aid® is totally amazing at helping cows get bunched up at breeding time, and calves will start eating it when they are about a week old, so it helps prevent scours in them. I sell a lot of DuraFerm® to goat and sheep producers and am actually getting more meat goat breeders all the time. And the Vita Charge Clench gel is one of the best products to help with diarrhea,” she said.

Although she specializes in large animals, she said her ranch clients have ranch dogs that have taken to the Vitalize® K9 products, and she has also helped a Husky owner whose pups suffered long-term diarrhea until she treated them and got their stomachs back to normal with the Vitalize Dog Gel.

She said the litter of three pups had suffered from diarrhea for most of their first four months of life with no break. Beth treated them with a five-day fenbendazole deworming treatment accompanied with the Vitalize Dog Gel to restore the normal gut flora. She said that particular owner is now a Vitalize believer too.

Additionally, Beth said that although dog is often man or woman’s best friend, their nutritional needs are often neglected. Ranch dogs are notorious for munching on the placentas after calving, which can cause stomach upset, and she often suggests Vitalize Dog Gel for ranch dogs who aren’t feeling their best. She also said many of her equine clients have seen amazing results with the Vitalize Alimend® and have also tried the Vitalize Alimed K9 for their dogs. She has personally experienced great results with the dog food with Amaferm®.

“We have two pugs, and when I switched their feed, gave them the same amount that I was giving them before. They gained five pounds in three weeks! I had to cut their portions down by one-third. I have a friend with labs, and she said with the larger dogs, to cut their food down in half to prevent weight gain,” Beth said. “Their coats are shinier. The coats are the window to what is going on inside of the body.”

Regardless of if Beth is selling VitaFerm mineral for cows, Sure Champ ® for a show customer or Vitalize Dog Gel to a small animal that has had too much afterbirth, she said word of mouth is often her best marketing tool. She said the products generally sell themselves once people see the results, just like they did for her and Michaela more than a decade ago.

“You sell the first bag of mineral, and the cows will sell the rest,” she said.

She has taken advantage of other marketing tools BioZyme offers and encourages others dealers to as well. She has had clients buy products after receiving the quarterly post card in the mail. She also shares the Promoboxx content and likes that it is available for her to use on her own social media.

As a vet, she said a quality nutrition program and a good vaccination program go a long way in keeping animals healthy and being proactive is best.

Thanks Beth for being a long-time dealer and sharing care that comes full circle!