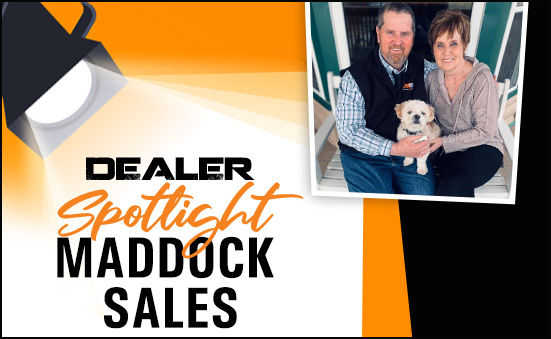 In the northern part of North Dakota, there is a BioZyme® dealer who doesn’t let any grass grow under his feet. He raises livestock, works for the local school district, sells and rents a variety of equipment, and he sells BioZyme products. Greg Maddock, owner of Maddock Sales, said VitaFerm® is his number one seller and with results that a customers can see with their own eyes, it’s easy to sell.

Greg’s involvement with the BioZyme products all started with a family friend, Dorothy Orts, former BioZyme ASM whose husband was also the ag teacher in Maddock, North Dakota, where Greg and his wife, Marla, live. Greg recalls that they were experiencing a bad drought, and he had started feeding his cows large, square hay bales. Dorothy had encouraged him to try the VitaFerm mineral, and he gave in, buying 10 bags. He knew exactly what his cows had been eating.

“When I started them on the VitaFerm mineral, they cut down on their consumption. The cows did well on the mineral; they looked good on it. I was sold,” Greg said. “There were no dealers in our area, and Dorothy convinced me to become a dealer. If you know Dorothy, you knew she bled VitaFerm.”

Believing in the product and sharing the results is the most effective sales tactic that Greg employs. He shares his business on his Facebook page and also has a website. For newer dealers, he encourages them to try the products first so they can see the benefits for themselves, and if they don’t have livestock, he suggests having a neighbor try the products and watching their livestock change and improve.

“It’s an easy product to believe in, and it sells itself. BioZyme has a great line-up for the whole season from conception to fly control to weaning time,” he said.

And just as the product line is diverse, so are Greg’s other livelihoods. He is a bus driver and maintains all the buses for the Maddock School District. He also runs about 100 Angus cows and backgrounds their calves. His herd also includes 35 Bison cows. He has developed a niche market for the Bison meat and offers trophy hunts for the older bulls ever few years. And yes, the Bison also get the VitaFerm.

“I’m a big believer in diversification and specialty farms and ranches,” he said.

We’re glad you’re a big believer in BioZyme and its product lines, Greg. It’s always good to hear from one of Dorothy’s friends who turned into a dealer. That’s the care that comes full circle.