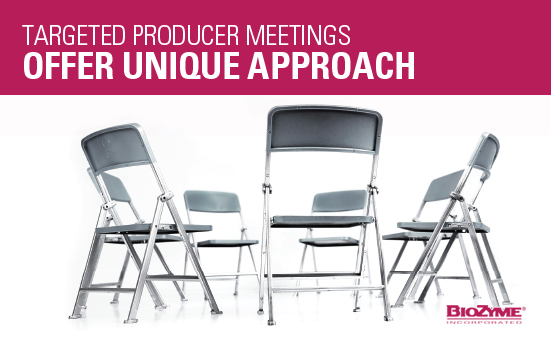 Livestock producers get a lot of postcards and invitations to producer meetings, sales meetings and educational meetings through the winter months. It seems like there is always something on their calendars, and sometimes they can’t make every meeting they would like to. As dealers, we need a fresh approach to reach these customers and potential customers where we can leverage our time while gathering an audience, but still take time to have one-on-one conversations that are key to relationship building.

Salem Veterinary Service in South Dakota recently tried a different tactic to reach its customers through smaller, more targeted producer meetings. Guy Rusche, ASM, said the lunch-time meetings were more conversational where he could talk about products with a handful of producers with similar needs over a sandwich and answer their questions, much like he might if he was visiting with them at their own kitchen table.

“The producers were all like-minded so I could fine-tune my presentation, which wasn’t a PowerPoint, but more like a one-on-one producer encounter with several people with similar needs at the same time and place,” Rusche said.

Salem Veterinary Service planned the meetings for Mondays throughout February, and customized the invitation list of its clients by those with similar needs and decision making processes. Because the dealer has established a good rapport with its producers, all invitations came directly from the dealer, and Rusche said 6-12 producers attended each of the four meetings. Topics of the meetings included VitaFerm® Concept•Aid® and looking more in-depth to the advantages of Amaferm®.

“Because the group was smaller, they felt more comfortable asking questions that they might not have asked in a larger producer meeting. I spent time answering those in-depth, technical questions without sounding like I was giving a college lecture,” Rusche said.

Rusche said Salem Vet doesn’t have much space for inventory, but at least one producer from every meeting stopped by the vet clinic to order or purchase product following the meetings, and after one meeting, seven of the nine attendees purchased product, a sure sign of success for the dealer.

Although these small targeted meetings worked well for this dealer and its clients prior to calving, Rusche said they will continue to host a more traditional producer meeting in the fall to discuss other products. The smaller, targeted meetings are just one more way to share the BioZyme® message with a group of current and potential customers.