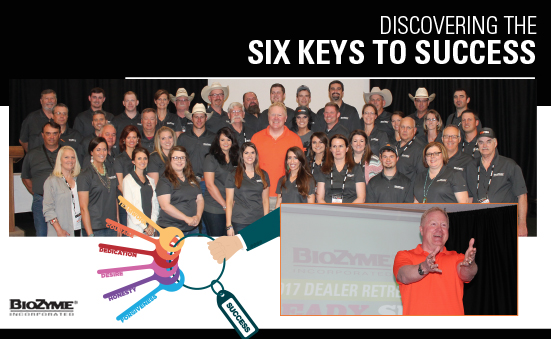 Most everyone remembers who wins. Olympic gold medalists are honored with the playing of their country’s national anthem. Rodeo athletes are interviewed after they win their respective sports. World Series Champions are honored with parades in their hometowns. Football fans watch the NFL draft each year to see who the first-round picks are so they can continue to watch their favorite college players in the pros. But have you ever watched the 12th round of the draft to see who is the 310th pick? Unless you are related to that particular football player, probably not. But not everyone can be first, and even when you are the 310th choice, you can still work hard, show dedication and become successful.

That was the message former Denver Bronco Karl Mecklenburg shared the final morning of this year’s BioZyme® Dealer Retreat as he reflected on his 12 years in the NFL. The 310th pick in the 1983 draft never gave up and became a Denver Broncos Captain and All-Pro Linebacker. His career included six Pro Bowl and three Super Bowl appearances and he became one of the NFL’s most versatile players, playing all seven defensive front positions – often during one game.

Mecklenburg had a dream, and he never gave up.

“Success is overcoming obstacles on the way to your dream,” Mecklenburg said. Now as a motivational speaker and author, he encourages others to follow his six keys to success.

1 – Teamwork. Leadership is the ultimate expression of teamwork. As a leader if you are clear and consistent with a team commitment, the rest of your team will follow.

2 – Courage. Mecklenburg encourages others to have the courage to try new things. This might be expanding your product line, reaching out to new customers or even hiring an employee if you are a one-person dealer. “If you take the first step in the right direction before anyone else, all the angles change in your favor.”

3 – Dedication. Don’t ever quit. If Mecklenburg had been discouraged by his 12th round pick, he might have given up and never played in three Super Bowls. If you are dedicated to your business and your customers, you will realize your potential and continue to grow your business.

4 – Desire. If you have the desire to succeed, you will work to succeed.
Talent won’t get you near as far as desire and preparation. If you are getting ready to meet with a potential customer, do your homework. Find out about that producer, what makes that producer “click”, what does he or she need to make the operation more successful? If you have the desire to succeed, and put the work and preparation into your desire, you will succeed. “There is nothing holding you back but yourself,” Mecklenburg said.

5 – Honesty. The only way to make improvements is to be honest with yourself and others. You must know where you are today to know what goals to set for the future.

6 – Forgiveness. “Anyone who has lived a lot has made mistakes,” Mecklenburg said. Forgive those who make mistakes so you can keep those friendships, business relationships and support systems. It is especially important to forgive if someone admits they made a mistake.

It is vital to keep these keys for success in mind – in everything you do. Today, you might feel like a 12th round NFL draft pick, but with courage, dedication, desire, honesty, forgiveness and a team like BioZyme backing you, you will be a success! Take the time. Find a way.