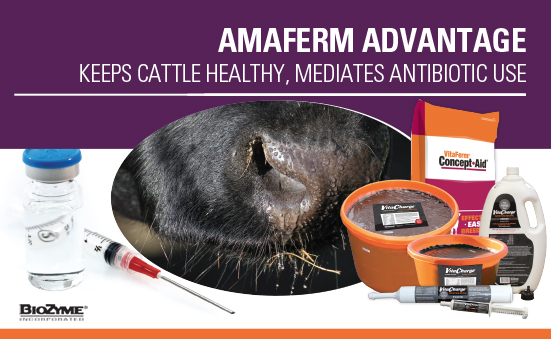 Prevention is the key to good health in your cow herd. Your herd health protocol should include both a sound nutrition program and good vaccination program. A significant component to a good nutrition program is a quality mineral package that works to keep the digestive system in check.

Taking a proactive approach to your nutrition protocols starts with providing balanced nutrients that your cattle need. Offering a product like a Vita Charge® Stress Tub or another VitaFerm® mineral product with the Amaferm® advantage will help your cattle stay healthy, productive and performing. Amaferm is a natural prebiotic designed to maximize the nutritional value of feed, increasing the intake, absorption and digestibility of nutrients.

Even with a sound nutrition program and proper vaccinations, chances are you will have a few head that get sick and will need to be treated. When treating cattle with antibiotics it is more important than ever to make sure they have Amaferm in their diets. Amaferm works with the antibiotics and helps mediate their negative effects on the digestive system, making sure your cattle get healthy and keep eating.

One often forgotten side effect of antibiotic use is the potential negative effect on the beneficial microbial population residing in the digestive system. A common side effect of prolonged antibiotic treatment is a reduction or slowing of the growth rate of these important microbes. Amaferm is research-proven to combat stress by supporting the animal’s own immune system, significantly increasing intake and nutrient utilization. Research shows that Amaferm helps support increased numbers of rumen bacteria and helps maintain a diverse population in terms of species, which is fundamental to a healthy animal.

Kevin Glaubius, director of nutrition for BioZyme®, offers some key takeaways from a Kansas State University Amaferm and antibiotic trial. Although the effects of the Amaferm were dependent on the antibiotic used and the species of bacteria that were studied, Amaferm did have positive impact on the antibiotics commonly used to treat sickness. This occurred by allowing the growth rates of important species of rumen bacteria to more closely resemble the growth rates of bacteria in the non-antibiotic controls.

“Some of the antibiotics we looked at in the study stopped growth of some of the microorganisms that aid in digestion, which could have a negative effect in the overall performance of the animal,” Glaubius said.

If you do have to treat a sick animal with an antibiotic, consider giving it a dose of Vita Charge Gel or Vita Charge Drench in conjunction with treating it. The Amaferm in the Vita Charge will help alleviate stress and keep the animal eating while it heals.