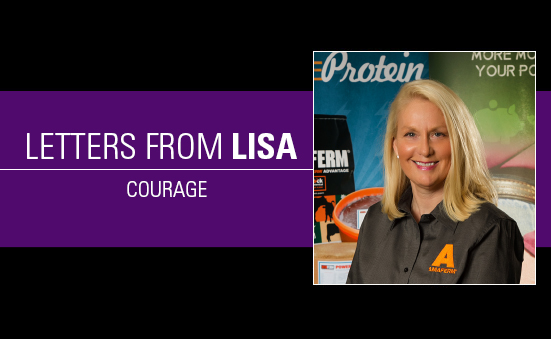 Christmas is my favorite time of year. The birth of Christ and its meaning has been a monumental part of my life, and my birthday is December 24 – that is a story of courage in itself.

There is a much better story of courage that took place at the first Christmas. We often miss it because our focus is on a young mother and a baby. This character heard first hand that his bride-to-be was pregnant, and it was not his child. He experienced a personal message from God because of the extraordinary event. He stood by the manger where the baby was laid. He provided protection for the mother and child during the early years of the child’s life. The man’s name of course is Joseph. What the story of Joseph tells us is that:

2. God gives us courage to overcome our doubts and fears.

3. God gives us courage to face the future.

God provides the same courage to business leaders, but we try to complicate it by making rash, unproductive or irrational decisions.

The word ‘courage’ derives from the Latin word cor, which means ‘the heart.’ Courage originally meant “To speak one’s mind by revealing all one’s heart,”in other words, to speak openly and to act honestly with integrity. It means to tell your story how it is – even at the risk of being rejected, ridiculed or misunderstood. Do you have this type of courage in your business?

The good news about courage in business is that it is not something you either have or don’t have. Courage can be learned, cultivated and practiced.

Six processes can help you start down this path: setting goals; determining the importance of achieving them; tipping the power balance in your favor to precipitate action; weighing costs against benefits and moving forward with that balance in mind; selecting the proper time line for action and developing backup plans.

Changing our lives, and eventually creating an entire culture of courage, starts with small acts which then produce micro-changes in each of these processes.

As we enter into the Christmas season, do you need the courage of Joseph to boost your business? Joseph took what he perceived at the time to be small steps, but those courageous steps made our world and our lives a better place.