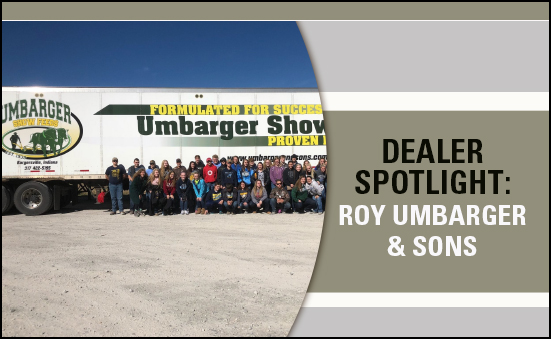 Jackson Umbarger is the fourth generation to own and work at Umbarger Show Feeds in central Indiana. Although this family-owned-and-operated feed business has remained in the family for more than 80 years, he said it isn’t just blood that is considered family. The employees, the dealers and the customers are all considered part of the Umbarger family.

“We strive to have that feeling of family. We really do care about your kids and their show livestock. Our company has a family feel and our employee retention rate is high, with a lot of our people having been here 15 plus years. That’s how its always been, and that’s how we like it,” Jackson said.

Jackson oversees the daily operation of the feed company that places its sole focus on show feed manufacturing. A new state-of the-art mill was completed in November to better ensure a consistent, accurate product. All Umbarger feed is manufactured on-site and shipped to its dealer network on a regular basis to deliver accurate, fresh product. For dealers within a two-day driving range, the company uses its own dedicated truck line to deliver to customers. They work efficiently in their dealers’ favor since they are so specialized with low seasonal minimum orders, like this time of year for example. They will also mix products within a pallet.

One of the customer services that Jackson takes great pride in is partnering with like-minded high-quality companies with a show focus whose products they can also distribute to Umbarger dealers. That is one of the reasons their partnership works so well with BioZyme®.

“The BioZyme product line compliments ours. It matches what we believe in. We also put Amaferm® in a lot of our feeds,” he said. Umbarger Show Feeds also distributes Weaver show supplies to its dealers at no additional freight fee – another service to assist its dealers. As Jackson said, if an exhibitor is looking for a big item like a showbox or fitting chute, and his or her local Umbarger dealer can get that item for that person, that person is more likely to build loyalty to that feed dealer instead of taking his or her supply and feed business to a competitor.

One area that Jackson said he would like to focus more on is marketing; however, providing apparel that is trendy and recognizes winners has been effective over time. When he assumed a leadership role in 2008, the company awarded about 40 winners’ jackets that were personalized with the exhibitor name, show name and the Umbarger logo. In 2020, more than 1,500 jackets were awarded, showing the growth of the company and creating even more walking billboards.

Family. Quality. Customer service. For a company whose logo is “we feed champions,” it’s no wonder that they also provide “care that comes full circle.” A partnership like that is just one reason BioZyme values a customer like Roy Umbarger & Sons.