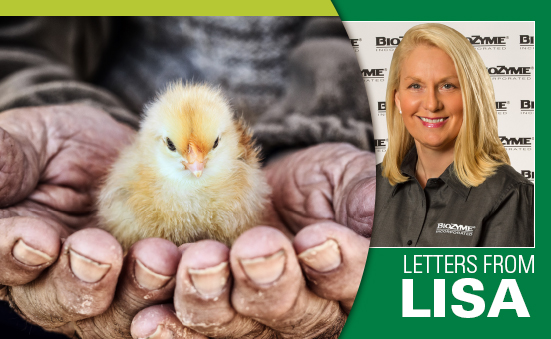 My start with BioZyme® really came from being Bob’s wife. Both of these were very good decisions for me. I traveled with him to shows, and as a true animal lover became totally engaged, but as a business visionary who never stops thinking, I saw lots of opportunity. One of my favorite stories on this front occurred at the National Western Stock Show (NWSS). I was “working” the booth when a very nice lady stopped by to tell me how the Amaferm® Pellet had made a significant difference to her rabbit breeding operation. She was passionate about it, and I was so excited to tell Bob the story. When I did the response back was, “so how many rabbits does she have?” I excitedly shared the answer, 800. He replied, “how many Amaferm Pellets does a rabbit eat?” I replied 1 pellet. You know what came next, a mental evaluation to see if I had lost my mind.

I share this story because I am sure your initial response to this Backyard Boost™ idea could be the same. So please give me a minute to explain before you immediately send me to the insane asylum.

Backyard chickens are cropping up everywhere. Nearly 1% of all U.S. households surveyed by the U.S. Department of Agriculture reported owning backyard fowl in 2013, and 4% more planned to start in the next five years. That’s over 13 million Americans flocking to the backyard poultry scene. A 2015 review of 150 of the most-populated U.S. cities found that nearly all (93%) allowed backyard poultry flocks.

The coronavirus pandemic is heightening interest in raising young chickens for a reliable supply of eggs, with hatcheries saying they’re seeing a flood of new customers.

“We are swamped with orders,” says Nancy Smith, owner of the Cackle Hatchery in Lebanon, Missouri. “We can’t answer all the phone calls, and we are booked out several weeks on most breeds.”

“We’ve never seen anything like this, and I’ve been here since 1964,” Smith says, describing the spike in her business.

For families adapting to disruptions brought on by COVID-19, raising hens is seen as an answer to vexing questions about the availability of staple items at grocery stores. Starting a backyard flock could also be a rewarding project for Americans who now face the prospect of spending weeks or months at home with schools closed and workers laid off, furloughed or working remotely. Folks who are feeling cooped up, in other words, may want to start a coop of their own.

Where do I see this product line growing/going?
Through the roof.

Just one hatchery, Cackle Hatchery, supplies chicks to some 1,600 feed, farm and home stores across the country. Chickens are the hottest new backyard “pet”! It seems that every Tom, Dick and Susan wants to raise chickens in his or her backyard, whether that yard is one square foot or one hundred.