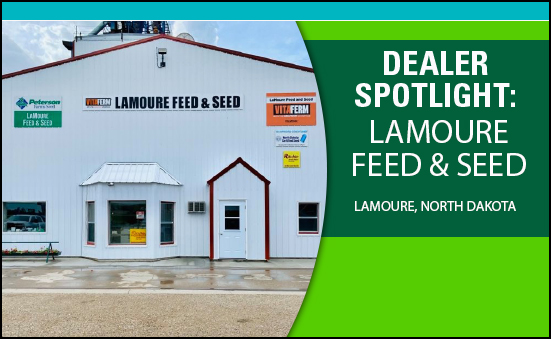 It’s not always what you know, but who you know. That held true for some North Dakota teens with a show heifer that went off feed at their county fair, but they knew the late Dorothy Orts, BioZyme® Area Sales Manager extraordinaire. Dorothy introduced a young Trevor Wendel to a product called Amaferm®, and his heifer started eating, and that is a lesson he never forgot. Years later when he returned to his family’s feed store, LaMoure Feed & Seed, he knew that Amaferm and the BioZyme products needed to be part of their offering.

“Amaferm is the one thing that sets us apart from all of the other mineral companies out there. It’s a magical powder that once our customers try, they don’t want to go without,” said Wendel, feed manager at the store, which is owned by his brothers.

Wendel relies heavily on word-of-mouth marketing for the success of the business. He looks to larger scale, successful cattle producers who take pride in their operations to try the products with the Amaferm advantage. Those producers are happy with the results and in turn share the information with friends and neighbors, who then also want to try the products as well.

The Gain Smart® mineral is by far his most popular product, although he said it isn’t always used on strictly stockers. He said many of the cow-calf operators will mix Gain Smart Balancer in to their TMRs to give their cows the vitamins, minerals and Amaferm they need through the winter months.

Another popular product is the VitaFerm Concept•Aid® 5/S. He makes a custom blend with that and rumensin for producers to use during calving season and prior to breeding.

LaMoure Feed & Seed hosts a producer meeting each fall prior to weaning time to show appreciation to its customers and educate customers on anything new. Otherwise, they take a no-frills approach to conducting business and rely on the quality of products to sell themselves. He advises newer dealers to lean on their ASMs as a resource and always find those good customers.

“Customers that have good cattle are proud of their cattle and will spread the word about the products they use. They will also pay the bills, and that is important,” he said.

Thankfully Dorothy ran across that struggling 4-H member all those years ago with her magical Amaferm! That young 4-H member remembered Amaferm and has evolved into a long-time, multi-year VIP BioZyme dealer. That is care that comes full circle!