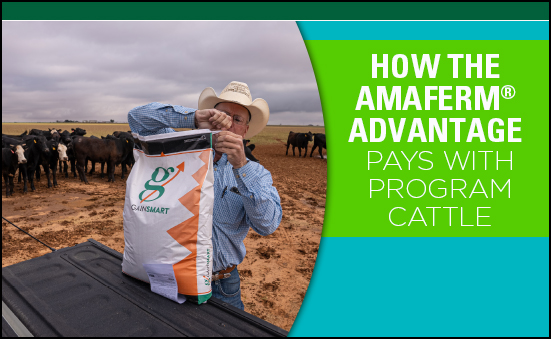 Are your customers feeding calves to sell at the local auction market one pound at a time? Or are they feeding cattle in a program to capture the most value? If you are not sure, consider having a discussion to better understand how they market cattle, and educate them on the value of getting Amaferm® into their diets so they can be part of a program that pays.

“Branded programs increase a producers bottom line and help develop the reputation of a quality producer who is working at producing a superior product,” said John Tucker, BioZyme’s Large Beef Account Specialist. “When I think of quality producers, I think of those who feed VitaFerm or Amaferm. I can count on one hand the number of commodity producers, those who just feed a hodge podge of cattle, who feed Amaferm.”

In recent years, producers started receiving premiums by selling Gain Smart® Raised or VitaFerm® Raised program cattle through Superior Livestock. These were the first two nutrition value-added programs that Superior recognized in its suite of value-added programs. Calves must be on a Gain Smart mineral 45 days prior to sale through delivery or raised on a VitaFerm-fed cow or be eating a VitaFerm mineral for the same time period. Buyers recognize that the Amaferm advantage creates healthier calves that will go onto feed faster, and often those calves will meet the criteria for other programs like NHTC and all-natural as well.

Another program where the popularity of Gain Smart is being realized is the Prime Pursuits program. This program was started by 44 Farms, a leading Angus operation based in Texas to supply high-quality Angus-based, all-natural cattle to Wal-Mart. According to Tucker, the calves that Prime Pursuits runs on grass are getting the Gain Smart Stocker HEAT® mineral. These cattle are typically higher performing and stay healthier, meaning they can fit the all-natural requirement for other health-based programs.

“In a program like NHTC, Amaferm provides the ionophores to capture what an implant would do for the cattle,” Tucker said.

He adds that the end results of these cattle that have been harvested through the Prime Pursuits program and marketed as McClaren Farms Beef in Wal-Mart stores in the southeast have offered consumers a high-quality, consistent product every time they go to Wal-Mart, something that has been especially important during the pandemic, as more people are shopping and preparing meals at home. Therefore, the entire beef industry is becoming challenged to become better as more competition is created.

Here’s your challenge: ask your customer if they are ready to sell their cattle on a program. There are many out there, and it is beneficial to find programs that are synergistic that a producer can receive multiple premiums on a load of calves. Programs pay. Programs that include the Amaferm advantage pay. Don’t forget to sell the Amaferm advantage through the Gain Smart program to your customers!