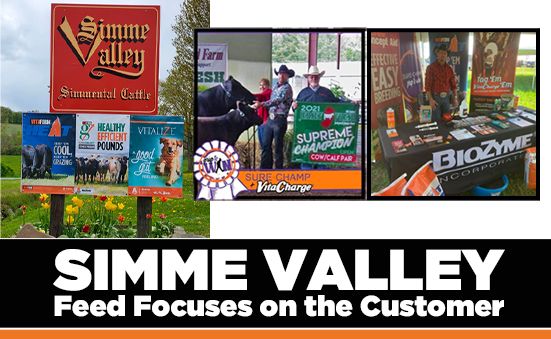 For a young boy from Providence, Rhode Island, spending summers on his aunt and uncle’s farm in NewYork were a highlight. It is there, he first showed Simmental cattle and learned to appreciate the wide-open spaces.

Fast forward in time, Philip Paradis offered to return to Simme Valley located near Groton, New York, to help his aunt Jeanne White after his uncle passed away. At first it was just for a breeding season. Then for a little while at calving.And, now for the past nine years, Phil has become a permanent partner withJeanne, who started the Simmental operation with her late husband more than 50 years ago.

“It was quite a change for kid from the inner city. I was just going to come help with calving for 60 days, and I’m still here,” Philip said.

Those early summers showing at fairs with his aunt and uncle foreshadowed what would become a passion for Philip, as he now shows the family’s beloved Simmental cattle all through New York and along the East Coast. That is how he discovered BioZyme®-through the Sure Champ® products.

“With Sure Champ, when we are traveling and showing our cattle never go off their feed or water regimen,” he said.

Then, he discovered the same Amaferm® advantage in the VitaFerm® Concept•Aid® products. However, sourcing them wasn’t the easiest, so he decided to become a dealer, and he hasn’t looked back.

‘I’m so glad I switched to the VitaFerm mineral. Concept•Aid has shortened our calving window from 60days to 45 days on natural heats. Getting done calving in 45 days was amazing! BioZyme has created a product that sells itself,” Philip said. He uses a lot of signage and word of mouth to share his success with the products and to grow his business. He also uses social media to share what he does on the farm and what shows he will be attending. When he first started, he had three customers. Three years later, he has more than 40 customers. He is trying to diversity his offering, by finding sheep producers to try the DuraFerm® line. He said one of the most popular products he sells is the Country Vet Natural Dog Food. He said his customers appreciate the price point, the way it helps their dogs not feel gassy and how it clears up their skin.

His best advice is to make sure to know what your customers use and don’t use so you keep your inventory correct and don’t have unnecessary products.

From the city life to simpler ways, Philip Paradis has become a successful BioZyme dealer in New York, living his dream. Thanks for sharing the Amaferm advantage with so many others, Philip!