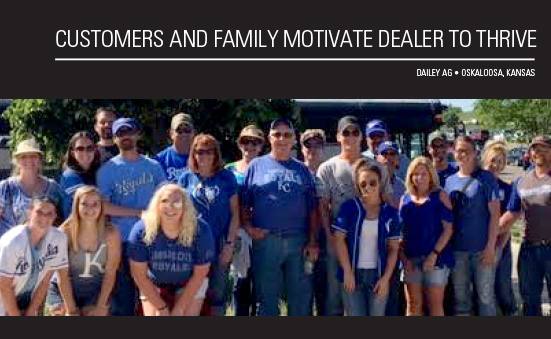 Mike and Nancy Dailey weren’t initially looking to get into the farm store business. Nearly eight years later, the farm couple from Oskaloosa, Kan.,
has built a successful farm store that carries everything from fertilizer
and fencing supplies to fuel and feed, including a complete line of
BioZyme® products.

“Our old co-op went out of business and we bought it so we’d still have access to fertilizer and the other resources we needed to continue farming,” said Nancy Dailey. “And the business just kept growing bigger.”

The family-owned and operated business also includes two daughters, one a student at Kansas State and another in high school that both help as their schedules allow; a son who farms and helps as he can, and a future daughter-in-law, who also works at the store. In addition to the family members who help as they can, Nancy said she has a great team of employees who live by the store motto, “Ag is a Dailey Job.”

“I enjoy seeing my children interested in our business. We want to
continue to build a business that we can be proud to leave them
someday,” Nancy said.

As the Daileys see a need in their rural community, they try to fill it. When the local gas station closed, the Daileys bought those tanks and started offering both off- and on-road diesel. And the same can be said about the BioZyme products. A local livestock producer inquired at Dailey Ag about VitaFerm® HEAT®, and so the Daileys did the research and became dealers
to meet their customers’ needs.

“We didn’t have to do too much advertising. I put on our sign out front that we were VitaFerm dealers, and people would come into me and make their requests. We started with HEAT, and then added Vita Charge® Stress Tubs and now carry a full line,” Nancy said.

Nancy says they have seen tremendous growth in the sales of the BioZyme products since they became dealers in 2016. One advantage she says their dealership has is they can keep their prices lower and pass that cost savings to their customers since they are located about an hour from St. Joseph, and often send their own semis to pick up orders.

She has also taken the opportunity to work with ASM John Jeffrey to learn from him and use him as a resource. At a producer meeting Dailey Ag hosted in August, Jeffrey took the time to talk to customers and potential customers to educate them on the benefits of BioZyme products and to answer their questions individually. Nancy said she appreciated the information as well, and at least two customers told her it was the best meeting they have been to where information, rather than a pushy sales talk, was presented.

“People are familiar with the BioZyme products and they like them. If there is something they need or want they will come in, and we will get the product for them,” Nancy said.

With a customer-service attitude like that, Dailey Ag is sure to be a business to thrive for generations. For more information about Dailey Ag, visit www.daileyag.net.